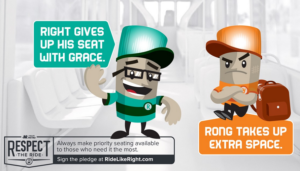 Lots of people do, every day. Some walk, some drive, some ride a bike or a skateboard or a bus.

Some who are in the Phoenix area ride the Light Rail, and sometimes that’s a pretty cool way to travel.

But there are a few people in the world (even in Phoenix) who are not about doing good, they’re about them.

Apparently they haven’t learned the difference between Right and Rong.

Yes, the name is misspelled intentionally, just to show how wrong Rong is. He’s the orange guy in the graphics, while Right is the green guy. Another subtle but effective message that Right is a go and Rong is a no.

The whole campaign comes under the heading of “Respect the Ride,” created by the folks who operate the Light Rail and a lot of other public transportation, Valley Metro.

A big part of that is respecting the other people who are on the same ride, and most of the graphics are about actions. The one shown above is Right giving up a seat “with grace” while Rong takes up extra space.

There are a bunch of others, but one I want to highlight has to do with pets. 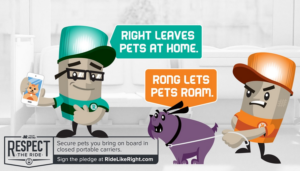 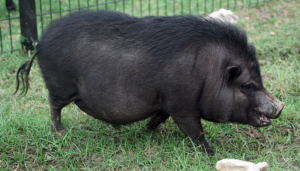 My bride and I rode the Light Rail from the burbs to the city using day passes, stopped for lunch on the way back, then got back on to head home.

Getting off the Light Rail as we were getting on was a passenger with a pet on a leash. The pet looked like a close relative of the beauty above–a Vietnamese pot belly pig.

Part of the Ride Like Right campaign has to do with pets, and it says, “Secure pets you bring on board in closed portable carriers.”

To be fair to that passenger, I just don’t think that’s possible with a pot belly pig. But he did have a leash!

Ride like Right, and whether you’re on the Light Rail or on the highway in your own car, Do Good.