Rob Kenney grew up without a father figure. Yes I know, he’s not the only one that grew up that way. Sure there are many things he wishes he could have done or experienced with his dad, but he’s doing fine. He had to learn how to do things, basic to hard, on his own.

By the time Rob was 12 he had basically been abandoned by his father. His mom had moved away leaving her children with their father. Unfortunately, he really didn’t want them, so eventually they ended up with their mom in Kansas. Leaving Rob and his siblings without a father forced him to learn how to do things that normally could have been learned from a father figure.

Growing up this way made Rob a very strong adult. He has been married for 29 years and has raised two happy adults. One really cool thing to note is he has since reconciled with his father. Just because there wasn’t a relationship back then doesn’t mean there can’t be one now. 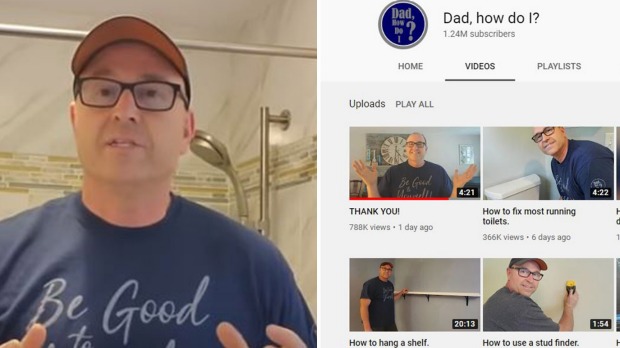 This period of ‘different’ during the past few months has been quite a challenge. For Rob, it has been a time of doing. He found inspiration during this time of quarantine to start a YouTube channel to help kids learn how to do everyday tasks.

Rob said, “I want it to be about everyday tasks, but I also would like to pass along some of the wisdom I’ve learned along the way to encourage people.” His channel includes tutorials on how to unclog a drain, fix toilets, check the oil in a car, how to check the air in your tire, even how to shave your face.

Rob’s beginnings are not unusual, sadly they are all too common. However, his ability to rise above his environment as a child and eventually make a positive impact as an adult, that is awe inspiring. Rob is doing good for others, not for his glory, but to help those trapped in the same situation he was in. He doesn’t have to do good…he wants to do good.

Thank you Rob Kenney – you are a good man!