Before we were even aware of it, we were being taught to compare ourselves to others. As a baby in a stroller we all heard how beautiful we were. “Hey,” we all thought, “I turned out good.”

As we grew up we continued to be compared to others, in both positive and negative ways, and we began to develop a picture of who we were. Sometimes those comparisons were intended to hurt us a little and sometimes they were intended to lift us a little. I can remember being on both sides of “Why can’t you be more like your brother?”

When I was the one being spoken to, it was bad. When I was the model, it was good. I was learning that comparison is an important part of life, but I didn’t really understand it. 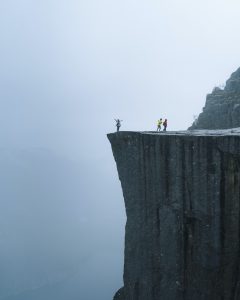 If all the other kids jumped off a cliff…

I was never asked the classic question about jumping off a cliff, but I was aware of it. I even prepared an answer just in case, which was, “That would depend on what was at the bottom of the cliff.”

Today I know I was blessed to have never given that answer, clever though I thought it was when I was a pre-teen. At the same time, logic was beginning to come into play in my thinking. I was starting to see that following the crowd was not always a good idea, even though there was this thing called “peer pressure.”

No, I would not follow the crowd off a cliff. Yes, I did follow the crowd–or at least my friends–into some strange and occasionally slightly dangerous situations. But we were friends, not rivals, and there was very little negative comparison among us. But comparison was all around us.

There were things in school called grades, and they were a source of comparison. We also had dances with “Kings” and “Queens” and “royalty.” At our high school there was a sort of “ultimate” Mr. & Miss competition. There were also clubs and honor societies and student council elections. Every one of those things was both a way to honor those who achieved more and a way for kids (and teachers) to compare the kids to each other.

That kind of competition drove many of my classmates to excel. It had little effect on me, because I kind of didn’t care. Then I discovered girls, and I began to care a little more. They too, it seemed, were making comparisons about the boys. Was I good enough to go out with the girl I liked?

Around this time the word “good” began to play a larger role in my understanding. As a member of the golf team, I was told by several adults that I was a good player. I wasn’t the best player, but I was good. It was also said that I was a “good” student, though my grades didn’t always support that opinion.

At church, where I was pretty involved, I learned that I was a “good” person. In the back of my mind I wondered, “Compared to what?” I always assumed, as many people do today, the comparison was to other people. Even though I was not Mr. CTHS, I was good.

It was in the three years after high school that I figured out I was not good in almost any sense of the word. Unfortunately I didn’t figure that out in real time, I figured it out over time.

I will spare you the details, because it was not a pretty picture. Every challenge overwhelmed me, every temptation defeated me, and good was a word I rarely applied to myself. There was no self-loathing — I was plenty confident, even in the face of evidence against it.

Why? Because I was still stuck in the comparison mode, and I could look around and see people who (in my mind) were not as good as me. All I had to do was say to myself, “I’m better than him” and I was good to go.

Fortunately I grew out of that. Unfortunately many, many people have not. So many silly things are happening today because people are comparing themselves to others, using a standard they created!

“I will go and tear down a statue,” someone says, “and that will make me better than the person who is willing to leave it there.” And of course they implicitly believe they are better than the person commemorated in the statue. They have compared themselves favorably to people they don’t know while committing an act of destruction.

That, of course, is exactly the crime of a person of one tribe killing a person of another tribe in an act of genocide. It is the crime of all who use their own standard to tear down anyone who does not agree to their standard. It is “comparison good,” and too often it is not good at all.

Thank you, Uncle Sam and Jesus

Along the way I had moments of awakening, but they didn’t stick. That all changed when I was drafted into the U.S. Army and reported for duty at basic training. Through both the discipline of military service and a renewed commitment to follow Jesus, good came back into my life. The difference was that good was now a goal, not a comparison, and it stuck.

To do good as a natural choice is to be good, and maybe for the first time I was trying to do good. Up to that point I was trying to be “better” than others, and sometimes the standard was pretty low. That wasn’t wise of me, but it was safe.

Finding out how good you are

After the Army I went back to college, this time with a wife and a better understanding of what I should do. The small school I went to didn’t have a golf team, but they decided to start a tennis team. I had been decent at the little tennis I’d played, and I dove in with enthusiasm. Several others joined in, and we formed a rag-tag team of good athletes without much tennis background.

I played in the number 1 position on the team, which meant I was a little better than my teammates. The comparison didn’t matter, though, because in the first year I lost every match I played against other schools. But I did not despair, because it wasn’t about being number 1 (comparison), it was about being good. That meant I had to choose to practice, to work hard, to study the game and learn strategy as well as strokes.

Eventually I won a few matches, and after graduation I stayed at the school and coached tennis. Two years later I became a tennis professional. Not the touring kind, the teaching kind. But in trying to do good/be good, rather than just be better than someone else, I rose above anything I thought I could achieve.

Here’s something I learned: one of the best ways to improve at tennis or golf (or any sport) is to play against people who are very, very good at winning. All of that, however, is still a comparison.

In the C. S. Lewis book quoted above, he went on to write,

In the comparative sense, you can find out if you are good by competing with others. But remember, that kind of “good” is always relative and it is generally not the highest or best kind of good when applied to humans.

In the sense that is important, the deep down inside you sense, you find out if you are good by resisting bad.

You are good if you choose to resist and do resist the temptation to do bad. The tougher the temptation and the longer it lasts, the harder you have to try to do good.

I don’t know if you are good in this critical sense or not. I do know this: you can resist temptation, and you can do good. That’s why we say, Do good. It’s in you.

Joseph’s wisdom on good and evil