Two Cincinnati Police Officers have done something that will significantly shore up the force’s image, much damaged after the George Floyd incident. The two officers were on a routine patrol when they came across a group of kids.

Learning that the kids needed a new basketball net, the cops went to the nearest Wal-Mart store. They bought a new net and a basketball also. They also informed their CPD Social Media Coordinator, Sgt. Eric Franz, they wanted to remain anonymous. 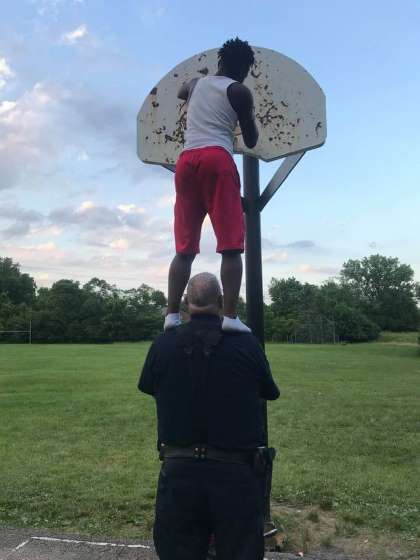 The Police officers also helped the kids put on the new net. One officer let a kid use his shoulder as a ladder.

Melkite Hill, a Cincinnati resident, was at a basketball court in College Hill with her three sons and their friends. The gesture moved the kids.  Melkite Hill also saw the good deed of the police officers. Enamored by the act of kindness by the police officers, Hill shared her thoughts on Facebook.

Talking to Cincinnati Enquirer, Hill said, “I wanted my people to see. My family members and friends to see – everybody doesn’t have to look at police, you know, in that way. There are some good ones out there who care about us as mothers, fathers, our children, and being safe. ”

Good People Out There

Hill wanted to do something for the police officers to show gratitude for their noble act. Hill made them gift baskets and dropped them at the police station. Hill’s Facebook post became viral and shared 5000 times.

The police officers wanted to remain anonymous. However, the Lord is always watching and rest assured he will reward these men in the future. At times when some big companies spend millions and get great publicity and kickbacks, it is refreshing to see people who are doing good. The really cool thing is they remain anonymous.

Batman Cooking and Delivering Hot Meals to Homeless in Santiago