CNBC reports that U.S. weekly jobless claims fell below 1 million, the first time since mid-March. It is a good indicator of an economy slowly finding its feet after the pandemic. Economists surveyed by Dow Jones revealed a decline of 228,000 from the previous week’s total. First-time unemployment insurance claims in the last week were below one million.  It is an indication that the labor market is recovering from the pandemic. 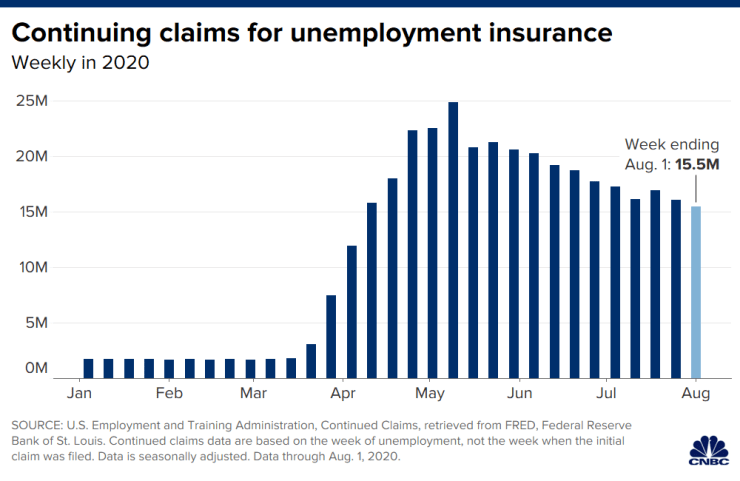 The total unemployment insurance claims until August 8 was 963,000. It was far below the estimated 1.1 million by economists surveyed by Dow Jones. For 20 consecutive weeks since the number one economy in the world went into lockdown, jobless claims figure stood above one million. The only other time when this figure was below one million was on March 14 when the pandemic was first declared.

However, the below -1 million marks do not give the luxury of complacency. The economy needs more support. The figures are still far above the pre-pandemic levels. Gus Faucher, the chief economist at PNC Financial Services, wrote that people filing for unemployment insurance, both regular and PUA benefits are reducing as the pace of layoffs slackens. However, the situation is nowhere near pre-pandemic levels, including job losses.

The stock market showed signs of recovery, the effect of the positive sentiments. The figures marked the second week of declines since the arrangement gave unemployment insurance recipients an extra $600 a week on top of their average compensation expired on July 31.  President Donald Trump issued an executive order that would provide an extra $400.Congress is debating the executive order.

However, skeptics have questioned the sops doled out by the government. Enhanced benefits were giving people an incentive to stay away from returning to work. The past week’s data will negate the argument of lawmakers to extend the period of benefits Jefferies said in a note.