Once upon a time it wasn’t considered polite to talk about politics or religion. Apparently times have changed.

It was also considered impolite to talk about money, but it was mainly people who had a lot of the stuff that thought it was impolite. Those of us with very little money had to talk about it. Where would we get it? Wouldn’t it be nice to have it? That kind of thing.

When Nancy Mitford poo-pooed her “American cousins” for talking about money, Ogden Nash let her have it with both comedic barrels. His poem to “Dear Cousin Nancy” included these lines:

I suppose even Nancy Mitford, though, would have said it was OK to talk about $8 billion dollars.

How much is a billion dollars?

In the Do Good U news (please subscribe if you haven’t already), I gave an illustration about $1,000,000,000 and how much you could spend per day for how many years. But the best illustration I ever heard is this: 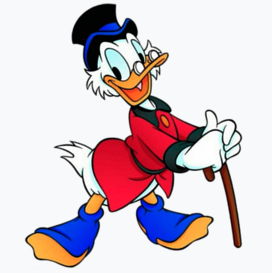 Unless you are Scrooge McDuck, though, you probably have better things to do with your money than stack it up and see how tall it is.

How to give away your money

I was part of a conversation years ago when a friend said, “If I had a million dollars, I’d give a lot of it to the church.”

“No you wouldn’t.” I couldn’t believe those words had come out of my mouth.

“What are you doing with the money you have now?” I asked. It turns out he wasn’t giving away a lot of it.

“Then,” I said, “that is how you would give if you had a million dollars.”

Giving away your money isn’t a matter of having extra money to give away, it’s a matter of how you think about your money and the habits you have developed for using it.

Chuck Feeney figured it out 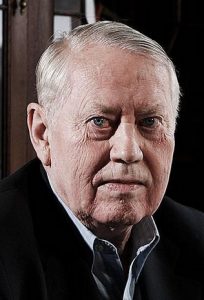 To many people, for very good reasons, Warren Buffett and Bill Gates are heroes. Chuck Feeney is their hero.

He and a partner co-founded Duty Free Shoppers, ran the company well, expanded, invested, and generally made a lot of money. That didn’t make Buffett and Gates admire Feeney so much, but what he did with his money captured their hearts.

With the advantage of hindsight we can now tell you what he did. He started a foundation called The Atlantic Philanthropies, and in 1984 transferred his entire stake in Duty Free Shoppers there. He didn’t tell the public or the press about it, and in fact didn’t even tell his partner.

It wasn’t until 1996 that Mr. Feeney told his partner and the rest of the world, through a New York Times reporter, that he had not personally owned any shares in Duty Free Shoppers for 12 years. While he was busy raising the value of those shares, he was flying coach and renting a house.

By the time Bill and Melinda Gates and Warren Buffett put together The Giving Pledge in 2010, Feeney had already given away $5.5 billion dollars. He had done it through The Atlantic Philanthropies, and all of it was given anonymously.

Now, ten years later, The Atlantic Philanthropies is closed. When the doors were locked Chuck Feeney, through the philanthropy, had given away more than $8.3 billion dollars.

A root of all kinds of evils, a tool for much good

In a letter to Bill Gates in 2020, Chuck Feeney included this statement:

“I cannot think of a more personally rewarding and appropriate use of wealth than to give while one is living — to personally devote oneself to meaningful efforts to improve the human condition.”

Aren’t you glad Mr. Feeney felt that way? I am, and I didn’t receive a single penny from his generosity. But I believe the world is a better place because of the good he has done.

You may have heard that the Bible says “money is the root of all evil.” That is a misquote of scripture. What Paul wrote was: “For the love of money is a root of all kinds of evils.” (ESV, 1 Timothy 6:10)

Money is a tool, and few have wielded it more adroitly for more good than Charles Feeney.

Follow his example of #GivingWhileLiving and see what good you can do with the money that has been entrusted to you.

Choose your investments and gifts wisely. Choose them for the good they’ll do. Your financial adviser might think that’s silly, but the Giver of all good and perfect gifts will love it.

5 Resolutions for a Great Year