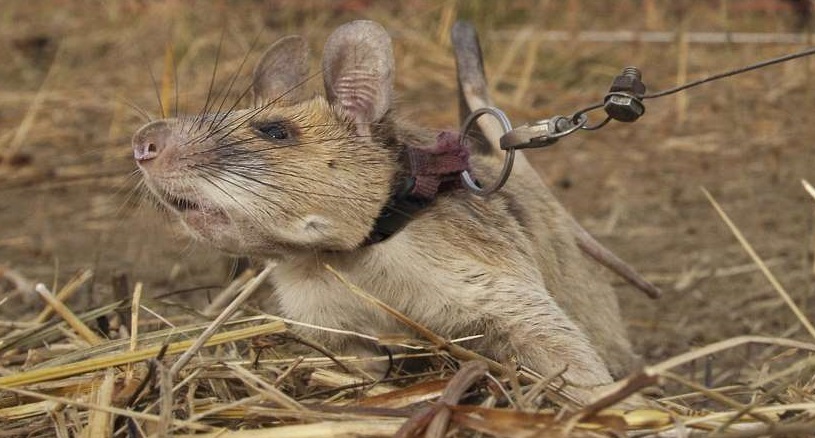 However, a rodent has excelled in helping clear unexploded ordnance and undetonated land mines.

Magawa is a giant African pouched rat. He has been awarded a civilian award for animal bravery by the People’s Dispensary for Sick Animals on Sept. 25. Associated Press carried his story, and the award given to him is equivalent to George Cross, an award given to British civilians or soldiers. They perform “acts of the most extraordinary heroism.

Magawa works with APOPO, a Belgian organization that trains rats to find land mines. In the past five years, Magawa has found 39 land mines and 28 items of unexploded ordnance, clearing more than 141,000 square meters of land.

Magawa has been making the land safe for Cambodians. The nation was the point of contention in the Cold war period. Warring factions laid more than six million mines in Cambodia during the 1970s. More than 3 million mines are still untraceable, as per MSN.com.

United Nations has banned the use of Land mines. In Cambodia, Accidentally triggered land mines have caused 64,000 casualties. The People’s Dispensary for Sick Animals has revealed more than 40,000 people have lost limbs to unexploded devices. APOPO is also active in Angola, Zimbabwe, and Mozambique.

Magawa uses his keen sense of smell to locate the landmines. He can discern between scrap and a land mine. Once he detects a landmine, he signals his handler who defuses the mine.

Today reports that Magawa can sanitize an area equivalent to a tennis court in 30 minutes. His work is life-saving and life-changing and directly impacts men, women, and children in the community. He can eradicate the risk of death or injury to people who are already suffering hardship. There is no risk to Magawa from the land mines. Though bigger than the ordinary rodents, African giant pouched rats are still light, and their weight will not trigger a land mine.

Businesses and Community Do Good Helping Children after Mother’s Death