This morning I was driving on a major highway before sunrise. Traffic wasn’t heavy, but there were plenty of cars. The speed limit was 65, and the average speed was around 75. I was in between those speeds and one lane in from the left when a pickup truck roared up close to my bumper and stayed there.

I’d say he was ten feet or so behind me, though in the mirror it looked and felt closer. The move was intended to be intimidating and controlling. I guarantee you, my emotions got involved.

If that had happened to you, where would your moral compass point you? 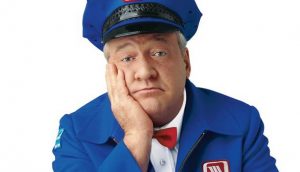 Remember the Maytag Repairman? The poor fellow was continually bored because there was never work for him to do.

I figure we could grab some of those Maytag folks, give them a little training on repairing moral compasses, and eradicate their boredom completely.

How about people who already have a moral compass? Are those being used and in good shape? Checking in with our cynic again, we’d hear that most of those instruments are gathering dust in the recesses of some mind and are rarely consulted.

“Who needs a moral compass anyway? We have Social Media to guide our behavior,” the cynic might say.

That makes me shudder.

A compass is most useful when combined with a map. I know several people who have never seen a printed map. If that’s you, imagine about 30 pages of Google Maps printed on a big piece of paper you can fold up and carry with you, even without WiFi.

Just match North on the map to the North on the compass, and you can navigate to your destination. Pretty simple, especially if there are roads. Those kind of maps are in fact called “road maps.” If you are in an area where there are no roads you would use a topographical map, and that’s a little more challenging.

The need for a moral compass 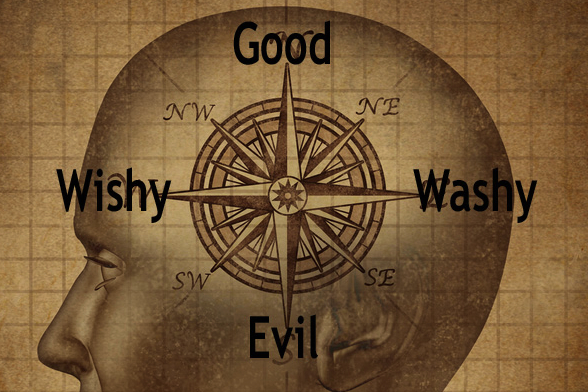 Pictured above is one artist’s idea of a moral compass. I like that it shows it residing in the mind, and that North is Good with Evil as its opposite. I believe that’s the way a moral compass should be designed.

While a moral compass is used individually, the community is made up of individuals. Your family, your town, your company, your country. Individuals behaving morally is critical to the survival of every one of those groups.

In fact the Founding Fathers of America knew two things regarding morality: it cannot be legislated; without it democracy cannot survive.

Even Plato knew that a democracy couldn’t last without morality. He said once people discovered that they could vote based on their personal interests rather than the good of the nation, their democracy would begin to fail.

Here’s a hard question for you: who do you think is voting in America in this election for their personal interests rather than for the good of the nation?

Unless you have a good moral compass, your answer was probably “the other side.”

One of the great benefits of a moral compass is that it brings reason into the equation. I’m aware that emotion is the predominant factor in almost every decision we make, including voting. You may think that doesn’t apply to you, but it does.

Years ago I worked in high tech, and I explained this decision making idea to some of the engineers at our company. These were logical people, and they insisted they only used reason to make buying decisions. But a shopping trip to a hardware store with me playing back their decision making process convinced them that their emotions ruled.

Without the balance of intentional rational thought, emotions will cause all of us to make decisions we later regret. When reason is introduced into the process, that is less likely to happen.

Back to the tailgater

Going back to my tailgater, my first thoughts were highly emotional. I wanted to tap my brakes. I wanted to slow down. Moving over to another lane would have been “weak” in my emotional mind.

Fortunately, I do have a moral compass. An important part of that is The Golden Rule: Do unto others as you would have them do unto you.

I wanted to respond to the pickup driver with Do unto others more of what they have done unto you.

Other voices have added to my moral compass in this regard, and with all that the emotion only held sway for seconds. I let that go, I maintained my speed, and the pickup driver roared around me to the left, where a lane was open.

For a split second emotion tried to worm its way back in, telling me to chase him and get even. The compass kicked in quickly, and I said a little prayer for that driver to be safe. The rest of the ride, and the rest of the day, and maybe lives, were saved by my moral compass.

Morality for many people is based far too much on what the masses are touting. That is so fluid that it’s almost impossible to keep up with.

A great philosopher wrote (just now), “Any belief system you have to change more often than your socks smells like socks that have not been changed.” Deep, eh?

Please do not follow the moral compass of the crowd, because it will lead you astray. Build your moral compass on the timeless truths of the Bible and on the wisdom of the ages. Include the virtues of integrity, responsibility, courage, compassion, loyalty, honesty, friendship, persistence, hard work, self-discipline, and faith.

But build it, and use it, and encourage those around you (friends and family) to tune up their moral compasses and use them.

Every time you use your moral compass well, you will do good. And even the world will move in a better direction for it.

What a Nobel prize winner said about doing good