With only that information available to you, you might conclude that all of the men in all of the groups are the same. You would be wrong.

There is a great joke about a man walking across the Golden Gate Bridge when he sees another fellow about to jump. He gets him to stop, they talk, and they make a “we both go to church” connection.

As the rescuer takes that connection deeper (what kind of church, beliefs of that church, practices of that church) the jumper comes down off the bridge rail and seems to be safe. He’s found a friend.

Then the rescuer pushes the connection one step further, and it breaks. The last tiny little insignificant thing about their churches is different.

At that point in the joke, the rescuer hesitates, looks at the ground, then looks at the man and says, “Sorry I interrupted. Go ahead and jump,” and walks away.

Are you one of them? 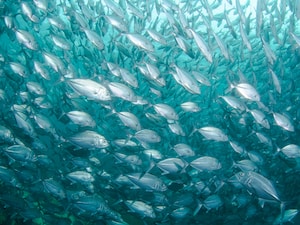 More and more these days, we are making judgments about people based on “their group,” and we  make judgments about groups based on individuals. Such judgments are as old as time, of course, but the difference today is that the groups are less and less real and the “members” are not members.

Unlike this school of fish, many of the groups are what I call assumed, never organized but quite real in the minds of people. If you’re white you are part of some assumed group that includes all whites. “Including the Swiss? Including the Germans? How about the French?” Well, no.

Once we start creating these assumed groups, we are free to judge people based on everything from their perceived social standing to the kind of car they drive, and lump them together like so many potatoes in a pot. We mash them up so thoroughly that no individual is recognizable ever again.

A real life example of this has to do with a would-be busker.

Back in January of 2007, on a subway platform in Washington D.C., a violinist set up shop during morning rush hour as a busker. He would play, people would enjoy it and put money in the violin case in front of him. At least that was the hope.

Thousands of people passed by as he played for 45 minutes. Though he was very good, only about six people stopped to 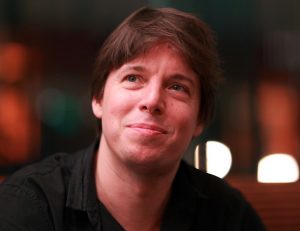 listen for a while and about 20 people put money in his violin case. His take was less than $35.

The violin he was playing, which normally lived in that case, was worth $3.5 million. It was a Stradivarius, and the man playing it was Joshua Bell, one of the foremost violinists of our time. Just two days before he had sold out a theater in Boston with some of the tickets priced at hundreds of dollars.

But because he was standing in a public place, busking, he was largely ignored. They saw a street performer and very few heard the music. One who did was a woman who had seen him in concert, and another was a three year old boy who wanted to stay but was hurried along by his mother.

Those people in Washington D.C. are obviously uncultured and uncaring.

Do you see how I did that? I just lumped everyone in a major city into one group and made the entire group bad. It was easy. It was also wrong, and I feel compelled to say I only wrote that to make a point. I don’t believe it, although it is Washington D.C. (Sorry.)

So why are we so quick to say that all white people are racist? Why are all black people oppressed? Why are all Latino people in America here illegally or in the drug trade? When are we going to stop judging books by their covers and read what’s inside?

Perhaps there are times in life when some preliminary judgment based on outward appearance is appropriate, but I believe those are rare.

Even little outward signs, like playing a violin on the street instead of a concert hall, should not be enough to cause the kind of thoughts we have about our fellow travelers.

I started writing this piece two days ago, and it was about individualism vs. collectivism. Maybe I’ll finish that, but because this is the last long piece I’m going to publish before the election next Tuesday I thought I’d insert a little good into the conversation.

It seems to me that no matter who is elected to the presidency, the country will survive. But for it to thrive we will need to become somehow less partisan (a fancy political word for prejudicial). We will need to work together rather than tearing each other apart.

Which side of that do you want to be on? If it is the good person making good things happen, then start right now. Recognize your own prejudices and fight against them. Then help others fight against theirs.

Finally, stop thinking of people as simply part of a group and think of them as people. The fact is we are all individuals, in millions and millions of combinations. Be the rescuer on the bridge who will save the person even if he doesn’t go to church. Stop and listen to the music in the subway. Let your child listen too.

And always do good.