Washington, Lincoln and Us

The first official Thanksgiving Day in America was Thursday, November 26, 1789. George Washington proclaimed it so on October 3, 1789.

On October 3, 1863, Abraham Lincoln issued a proclamation making the last Thursday of November a “day of Thanksgiving and Praise to our beneficent Father who dwelleth in the Heavens.” That would begin the very next month, on November 26, 1863.

The most recent Thanksgiving Day was celebrated yesterday, November 26, 2020.

Washington’s proclamation recognized the providence of Almighty God, including his care for America in the “conclusion of the late war.”

Lincoln’s first national Thanksgiving Day was in “the midst of a civil war of unequalled magnitude and severity.”

This Thanksgiving Day our war is not with another nation, nor are we engaged in a civil war. Our  current fight is against a virus, and we are not fighting it alone. The rest of the world is also engaged in this battle.

This enemy is not as strong as we first thought. Though it shouldn’t be taken lightly, it should cause little anxiety for the vast majority of people. Still, many find it more difficult to be thankful in such challenging times.

Perhaps you have noticed in your own life that it is fairly easy to be thankful when all is well. As someone said, we are grateful when things are great. But how about when they aren’t?

2020, at least in America, has been a very tough year for a lot of people. In addition to the pandemic, we had our quadrennial 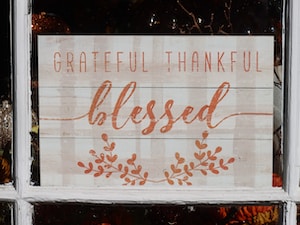 wrestling match we call a presidential election. This one actually started when the last one ended, and it continues today.

Add to that the rioting and looting, escalating from peaceful protests that followed the death of George Floyd.

All of those became cannon fodder for a media that fuels itself increasingly on bad news, and for months it seemed that America was absolutely doomed.

How is it possible to give thanks when we hear so much vitriol in politics, with volleys being fired from both sides, and when we’re bombarded with messages of fear about COVID?

As bad as all of that is, it does not rise to the level of pain or challenge America faced in 1863, the year the last Thursday of November became a national day of Thanksgiving.

Where is God in our troubles?

There are two kinds of thanksgiving, and I don’t mean that one comes with turkey and the other with ham. (My preference is both.)

What I mean is that there is the kind of thanks we give, as I said above, when all is well. That is the more common kind, and it was called “natural gratitude” by the Puritan preacher Jonathan Edwards. Most of us are pretty good at it.

But it isn’t so natural to give thanks when you’ve lost your job, or received a cancer diagnosis, or when a friend has died. Edwards called that kind of thankfulness “gracious gratitude.” Here’s how it works.

The natural kind is conditional, the gracious kind is unconditional. Parents understand these words empirically. They know their love for their children is not dependent on what their children do for them. They simply love them.

So when blessings are not abundant, or seemingly ever coming again, we can still thank God for loving us unconditionally. (Isn’t it cool when our kids do that for us?)

Those who can stand back a step or two from time to time and look at the world with a little less emotion will see this: God is being diminished in America. Personally I am far more concerned about that than I am about COVID.

One of the foundational principles of America is religious freedom, and I’m all in. If there are people who don’t want to give thanks to God for what they have, that’s fine. If there are those who want to praise God every day, that’s fine.

George Washington, who clearly believed in God (he was not a deist, as some say, but an Anglican), encouraged his men in the Revolution to stop gambling and swearing. He told them “it was unseemly to ask God’s favor on their efforts if they were constantly insulting him by their behavior.”

If Washington was right about that, and if God has shown favor to America, I can imagine how he must feel about our unseemly behavior toward each other and toward him. Even a pandemic, something that should drive us to our knees and unify us in our efforts, has been used as a weapon to fight each other.

That may just be insulting to God, who many believe could remove COVID as easily as he removed the plagues from Egypt.

Today may well be the day that many businesses get “into the black” for 2020 with pre-Christmas sales. I hope that they do. But it is also a day when most of us will have forgotten that just yesterday was a national day of Thanksgiving. That makes it a different kind of black Friday for me.

If your Christmas shopping will be hampered this year by financial challenges, you can still thank God. Be grateful for his love, and for friends and family and opportunities ahead.

All of us can thank someone else for being a friend, for loving us in spite of ourselves, and for walking through life with us.

In fact there is hardly a better, easier way to do good than to be genuinely thankful. Give it a try, even on Black Friday.