Perhaps you’ll see it often this year, but you’ve seen it now: “Jesus is the reason for the season.”

I don’t know who came up with that, or when, but it is true. Christmas is named for and held in celebration of Jesus Christ. Even Wikipedia says so.

Speaking of saying things, one of my favorites this time of year is Merry Christmas! In fact I’ve said it a bunch already, and I’ll be saying it again. Why? Because I really do want people to have a merry Christmas.

I’m not trying to be politically incorrect, I’m trying to bring cheer and joy and merriment. So I say it with both my mouth and my brain and my heart. In fact it’s one of those “heart to heart” phrases that is heard best with the heart.

This is the time of year when hearts around the world might be awakening. In America it has been a long time since our hearts have been stirred. Yes, there have been moments, but for the most part we’ve mostly engaged our mouths while our hearts slept.

A brief word about Xmas

For those among us who think of Xmas as some 20th century pagan shorthand (“Don’t take Christ out of Christmas,” the cry has been heard), allow me a moment.

Xmas is neither new nor does it take Christ out of Christmas. In fact X in place of Christ was used widely in the 16th and 17th centuries in written form, usually as Xian (Christian) or even Xianity. I used both of those liberally in my notes when I attended Bible college and later seminary. Writing X is much faster than writing Christ, and you wouldn’t believe how many times you write Christ in Bible college classes.

X, you see, is the Greek letter chi, the first letter of Christ. Long recognized as standing for Christ, X

Why a fish, beside it being easy to draw? The Greek word for fish is ichthus (iota-chi-theta-upsilon-sigma), which became an acronym for Jesus Christ God’s Son Savior. The X doesn’t take Christ out of the fish, it puts Christ in the fish!

Xmas as a pejorative

Back in the mid-1950’s, C. S. Lewis wrote an essay titled Xmas and Christmas: A Lost Chapter from Herodotus. I had completely forgotten about that essay until just yesterday.

I was looking for something else C. S. Lewis had written, that about modern translations of the Bible. I found my answer on a web site belonging to Karl J. Franklin, and I also found his recent blog post about the Xmas and Christmas essay. It is very well done, and I recommend you take a few minutes to read it.

The basic idea in C. S. Lewis’s quite humorous essay — it takes place in a place called Niatirb (Britain spelled backwards) — is that far too much about Christmas has become commercial. Far too little, on the other hand, is about remembering the birth of Christ.

That is still the case today, so I wrote this post to remind us to keep the commercial part in its proper place. That would be second place, not first place.

(The song title, by the way, is Happy Holiday. Singular. As in Christmas.)

The newsletter this week featured a quote from the prophet Isaiah. For to us a child is born, to us a son is given. We know now that Isaiah was writing about the child who would be called Jesus. Here it is in context, from the English Standard Version of the Bible:

For to us a child is born, 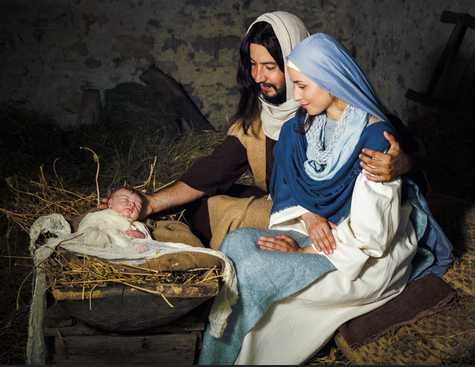 to us a son is given;
and the government shall be upon his shoulder,
and his name shall be called
Wonderful Counselor, Mighty God,
Everlasting Father, Prince of Peace.
Of the increase of his government and of peace
there will be no end,
on the throne of David and over his kingdom,
to establish it and to uphold it
with justice and with righteousness
from this time forth and forevermore.

Scripture has much more to say about the Messiah (which means “anointed one” in Hebrew, as does Christ in Greek), but I think this passage is among the most beautiful.

I’d like to encourage you, whether you believe that Jesus was God come to earth or not, to read those words at least once a day between now and Christmas day. Especially read it Christmas eve.

The simplest “do good” of all

Most of us will give and receive gifts this Christmas. Many will send and receive cards. Many more will send Christmas greetings electronically. Except for the coal a few of us may get in our stockings, that is all good.

No gift we give, though, can begin to match the gift God gave all mankind that night in Bethlehem. So if you want to do good this Christmas, read the words above from Isaiah, turn your eyes to the heavens, and say — from your heart — Thank you.