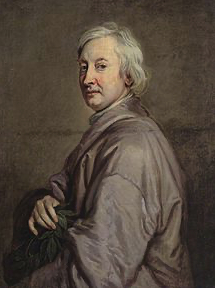 When you hear that John Dryden was the first Poet Laureate of England, you may think he was a Caspar Milquetoast kind of guy. I never met the man, but I think he was courageous.

Just a little bit of research reveals some facts about him. He was the eldest of 14 children, he was married and had three children, and he was a royalist. And, when he was in his late 40’s, he was attacked and beaten by hired thugs and survived.

That last little incident is interesting to me for a couple of reasons. First, he offered a substantial reward and a legal pardon if anyone came forward. (No one did.)

Second, he knew the alley where he was attacked was a dangerous place. It was near a pub called the Lamb & Flag, popularly known as Bucket of Blood because of the bare-knuckle fights held upstairs. It was also on his way home, though, and he took it.

The pub was a hangout of the Earl of Rochester. Dryden had written unfavorably about the Earl and also about King Charles II. So Dryden was probably not surprised when one of them hired thugs to, as the saying goes, “teach him a lesson.”

Today’s Bucket of Blood, where you can still find bare-knuckle fighting, is the media. I think of mainstream media as the building where the thugs are. Social media? They are the alleys where you can get beat up. Call the media biased, take the “wrong” political stance, or expose their insatiable appetite for bad news, then get ready for a fight.

And stay out of the alleys. As soon as you venture into Twitter or YouTube, the hired thugs (and a lot of volunteers) will come out and hammer you mercilessly. Just ask Kayleigh McEnany, Press Secretary for President Trump.

On January 6, 2021, she tweeted, “President Trump calls for Capitol protestors to go home in peace.” Then she apparently quoted a tweet from President Trump. I say “apparently” because it has been deleted by Twitter.

Their explanation? “This Tweet violated the Twitter Rules.” It’s a modern way of teaching someone a lesson.

Longer ago than Dryden

Another “I’ll show you who’s in charge” incident took place somewhere around 33 A. D. It involved a fellow called Jesus of Nazareth. The Lamb & Flag didn’t yet exist, but a “Bucket of Blood” could have been half filled by the blood this one man spilled.

He didn’t write a poem exposing the womanizing of the Earl of Rochester, as Dryden did. He didn’t write a Tweet saying something Twitter didn’t like. In fact, he didn’t write anything we know of, except some words in the dirt that were intended for a specific audience.

But he did speak quite a bit, and lots of people followed him and listened to him, and changed their lives. He also exposed the hypocrisy of many of the religious leaders—powerful men who loved the praises of others.

In an attempt to silence that message they didn’t debate what Jesus said, and they didn’t just beat him up in a back alley, they killed him. To do that, they enlisted the help of a mob.

Can you see what all these incidents have in common? First, people who have political or positional power often willingly use that power to retain it, even at the personal expense of their critics.

Second, the attacks from the critics are attacks of ideas and behaviors, while the retaliations are ad hominem attacks, even physical attacks. Even death.

Finally, they often get someone else to do their dirty work.

The 48 Laws of Power

Here is the reality: today and in every age powerful people have misused their power to retain their power. For many, that’s how they got there. Others were corrupted once they tasted power. Some, of course, have used their power for good.

A book was published back in 2000 called The 48 Laws of Power. On Amazon it has a ribbon that says #1 Best Seller in Political Philosophy. There are more than 15,000 reviews, and while they are not all positive the average score out of 5 is 4.7.

One reviewer who gave a generally positive review noted, “If you are aghast at the idea of manipulation and deceit then read with caution.” Or perhaps don’t read it at all.

Manipulation and deceit are tools of evil, not tools of good. They may help someone gain or retain power, but there will one day be a terrible price to pay.

Truth, on the other hand, is a tool of good.

It isn’t that we are afraid of being correct, but we are often afraid of offending someone. That didn’t seem to bother Jesus, who called some of the religious leaders a “brood of vipers.” Of course that was also a truth, and they proved it in their actions.

Seek truth in all the ways you can, and when you have truth, speak truth.

Even if you have to walk through an alley on the way home.

If you have a Do Good story about a person or a business, please send it along!
Get In Touch Opens in a new tab