Though the number is dwindling, there are still a lot of people around who watched the original Macintosh commercial, “1984.” I remember seeing it and knowing even then that I would buy one of those little boxes. Which, a few months later, I did.

The commercial aired on national television just one time. It was on January 22, 1984, during the third quarter of the Super Bowl, and it is now a legend in the world of advertising. Not only did it win a Clio Award, it was later added to the Clio Hall of Fame and named by some list maker as one of the 50 greatest ads of all time.

Many years earlier another ad ran just one time, and it was also in January. The year was 1915, the company was Cadillac, and the medium was The Saturday Evening Post. The title of the ad: The Penalty of Leadership. 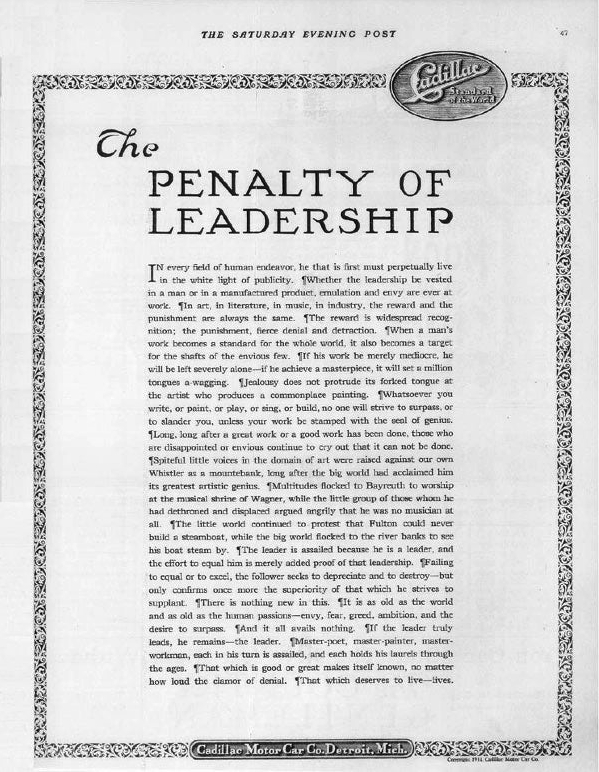 Imagine yourself flipping through the January 2, 1915 issue of The Saturday Evening Post. The cover depicted the New Year sweeping away the enemy. The Great War was being waged, and the hope was that it would end this year. (It did not.) The Post was the gold standard in many ways, and in 1915 it had already been around for 187 years.

On the other hand, the Cadillac Motor Company was barely a teenager, having been founded in August, 1902 as the Cadillac Automobile Company. By 1915 they were at the head of the pack.

That year they had a car with 70 horsepower that could reach speeds of 65 miles per hour. (While researching this post I found another car ad from January 1915 in the Saturday Evening Post. This one was for an electric car called the Baker, and it had a top speed of 23 miles per hour.) Cadillac set their brand apart with excellent craftsmanship, engineering, and quality. And of course power.

But the competition was moving forward too, and catching up. Cadillac’s lead was in danger. They responded with a very different kind of ad. It is pictured above, and the text (so you don’t strain your eyes) is reproduced below. The ad, written by Theodore F. MacManus, is a model of brand identity.

In every field of human endeavour, he that is first must perpetually live in the white light of publicity. Whether the leadership be vested in a man or in a manufactured product, emulation and envy are ever at work. In art, in literature, in music, in industry, the reward and the punishment are always the same. The reward is widespread recognition; the punishment, fierce denial and detraction. When a man’s work becomes a standard for the whole world, it also becomes a target for the shafts of the envious few. If his work be mediocre, he will be left severely alone – if he achieves a masterpiece, it will set a million tongues a-wagging. Jealousy does not protrude its forked tongue at the artist who produces a commonplace painting. Whatsoever you write, or paint, or play, or sing, or build, no one will strive to surpass or to slander you unless your work be stamped with the seal of genius. Long, long after a great work or a good work has been done, those who are disappointed or envious, continue to cry out that it cannot be done. Spiteful little voices in the domain of art were raised against our own Whistler as a mountback, long after the big world had acclaimed him its greatest artistic genius. Multitudes flocked to Bayreuth to worship at the musical shrine of Wagner, while the little group of those whom he had dethroned and displaced argued angrily that he was no musician at all. The little world continued to protest that Fulton could never build a steamboat, while the big world flocked to the river banks to see his boat steam by. The leader is assailed because he is a leader, and the effort to equal him is merely added proof of that leadership. Failing to equal or to excel, the follower seeks to depreciate and to destroy – but only confirms once more the superiority of that which he strives to supplant. There is nothing new in this. It is as old as the world and as old as human passions – envy, fear, greed, ambition, and the desire to surpass. And it all avails nothing. If the leader truly leads, he remains – the leader. Master-poet, master-painter, master-workman, each in his turn is assailed, and each holds his laurels through the ages. That which is good or great makes itself known, no matter how loud the clamor of denial. That which deserves to live – lives.

I confess that reading this ad does two things to me. It makes me wish I owned a Cadillac, and it makes me want Do Good University to be the very best. OK, I already wanted that, but this fans that flame.

When it comes to cars I’m not generally a brand guy. I have owned Ford and GM, Korean and Japanese. The brand I’ve owned most is Saab. I blame GM for their demise, and that damages my GM feelings.

But I have always thought of Cadillac as one of the best. Reading this ad from more than 100 years ago adds to that impression. The likelihood that my next car will be a Cadillac is remote, but I can imagine it.

As for inspiring me to achieve greater heights, I am not alone. Elvis Presley liked this ad so much he requested and received a copy from Cadillac. He framed it and hung it in his office at Graceland.

In fact Cadillac responded to requests for printed copies of this ad for more than 30 years!

Two times in the ad the word “good” is used as being equal with “great.” Good in this sense is not about quality (good, better, best), it is about moral rightness. The penultimate sentence says, “That which is good or great makes itself known….” At Do Good U, we believe that.

We want the companies and the individuals we work with to be both good and great, and we want them to be known.

Do you want brand awareness? Do good. Do you want the world to be a better place? Do good.

There may well be a penalty for leadership, but if you are doing good it is absolutely worth it.