I’ve been a leader — or at least I’ve been in leadership roles — since I was in grade school. The same thing may be true for you. Even with all that experience, a headline like this one will make my clicking finger twitch. There may be something here that will help me be a better leader. Yeah, I’m going to look.

So if you’re reading this and the title is part of the reason why, I’m glad. That was my hope, because I really am going to give you something that I believe will be useful to you, and important. My goal here — our goal at Do Good U — is to help people be better. That certainly includes leaders, who are people with a great deal of influence.

Now that you can see them, I want you to look at them differently. I find it best to do this one person at a time.

Seeing things others don’t is useful in leadership, so I’m going to suggest a new way of looking at people you influence.

First I want you to see those you influence as they are now. Use your own criteria for evaluation, but do this without judgment. This is not a critique, it is an observation.

Now look at them as they were before they came under your influence. Have they grown? Can you identify something about their character that is better? Are they happier, more fulfilled, contributing more? Are they influencing others with your influence?

Finally look at them as they will be in the future because of your influence. How will they be different and better? Think of them as people, not as position fillers.

What all of that should help you see is you. I hope you like what you see. 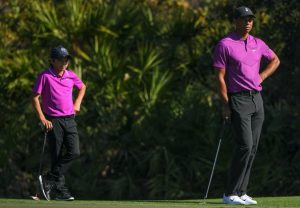 A great picture of the influence of fathers on their sons (and sometimes daughters), is to watch the PGA Tour’s PNC Championship. It used to be called the PNC Father & Son Championship, but the name was wisely changed. Teams usually consist of a PGA professional who has won at least one major championship and his son. Sometimes it is a daughter, and sometimes the child is the major champion.

Team members almost always dress alike, and that’s fun. But what I look for are moments like this one with Tiger Woods and his son Charlie at the 2020 Championship.

How did Charlie learn to stand like that? Do the people you influence mimic your mannerisms? Do they use your phrases? Are they, like Charlie, kind of a “mini-me” of you? I’m sure Charlie Woods is not a clone. He is his own person. So am I, but I recognize that in many ways I am very much a reflection of my father.

I am also a reflection of others who have had or do have a strong influence on me.

We spend hours watching videos, listening to podcasts and reading books about the great. When we do that we are, in effect, choosing our influencers, and we all want to choose someone great. 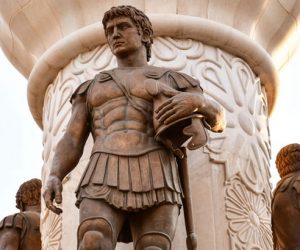 In fact one speaker who had an influence on me admitted that he had relentlessly pursued “the great.” He wanted to be influenced by both modern and ancient greats. It was Peter J. Daniels, and he was speaking to a room filled with senior level executives and other over-achievers.

He had a single question: “What makes the great great?” So he hired several college students to read books for him. He gave them specific instructions on what to look for in books about great people. They were to highlight passages that hinted at answers to his question. Finally they were to go back and copy all those highlighted passages into a document.

As I recall, they read a total of 300 books in studying “great” people. All of this took several months, and I was somewhat curious to learn the answer that he must have discovered.

If he gave us an answer, I don’t remember it. I do remember one line that he used, and in fact have quoted it many times over the years. He admitted to being a night-owl who likes to work late and sleep in. I am too, so I loved it when he said, “If God meant for me to see the sun come up, he would have scheduled it for later in the day.”

That’s a great line, but Peter didn’t tell us how to be great. John Knox didn’t either, but he taught me something more important.

Here is the “need to read” part

Let’s set “the great” aside. The reality is that most of us will never be “great” in the books-have-been-written-about-me sense. That’s absolutely fine. On the other hand all of us can be good.

John Knox understood the difference, and he put it in the context of influence. The thing you need to read and then reflect on is this statement of his:

When I think of all those who have influenced my life the most, I think not of the great but of the good.
John Knox

His words instruct us all. Your influence will have the deepest, most important, longest lasting impact on others not because of what you have achieved, but because of who you are.

That, my friends, is the takeaway for us all: be good, and your influence will touch the lives of people in extraordinary ways.

If you are a leader you must remember that, and you must apply it. Strive to be good, and do that in large part for the benefit of those you influence.

And the answer is…