Culture: the customs, arts, social institutions, and achievements of a particular nation, people, company, or other group.

Most of us are comfortable with the culture we live in. We are less comfortable in a culture we don’t understand. All of that makes sense when you apply one of my favorite sayings, “People don’t know what they like, they like what they know.”

I heard that from my friend Steve Eaton, a terrific singer/songwriter. When you go out to eat, do you go someplace new or someplace you know? When you get there, do you try something new or buy something you’ve had?

All of us are more comfortable with the “known.” In fact the greatest of all fears, psychologists tell us, is the fear of the unknown.

So we cling to what we know, and in our minds the things we know hold a place of honor. We make them king of the hill, and we defend them against the unknown. Until the unknown surprises us in a good way.

A lesson from music

In 1982 a brand new way to listen to digitized music was invented. It was called the Digital Audio Compact Disc, and it was a wonder! 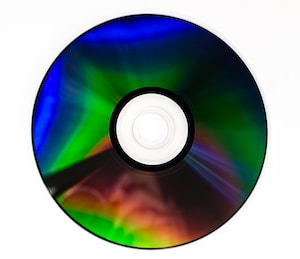 Invented jointly by Philips, a Dutch company, and Sony, a Japanese company, it revolutionized the music business. The sound was clean (too clean for some audiophiles) and amazing.

Naturally the CD needed a way to be played, and CD players were invented right along with the discs. About two years later my wife and I happened to be in Honolulu. At Ala Moana Center, we wandered into a Sharper Image store. (I said it was the 80’s.) We went in to look at newly introduced portable CD players.

Here’s the twist. The CD they played to demonstrate the player was Pachelbel’s Canon in D. I had never heard it before, and I was absolutely gobsmacked by what I heard. I did not buy a CD player, but I bought that CD.

And then I learned that Johann Pachelbel wrote that music sometime around 1680.

There I stood, surrounded by plastic gadgets and even brand new portable CD players, listening to music that had been written 300 years ago. I knew two things in that moment:

And I was right on both counts.

Sharper Image opened in 1977, so being in a Sharper Image store in Hawaii in the early 80’s was trés cool. I mean just look at all that stuff. The company closed in 2007, though it was revived in 2010 and remains. My money is still on Pachelbel’s Canon. 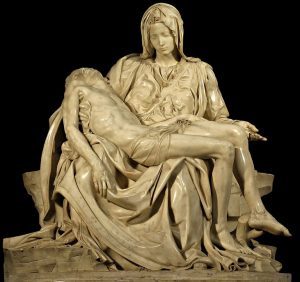 have been others like them and there will be more in the future.

So what lasts? It is not, I hope you already know, “things.” It is also not presidencies, or even dictatorships. We must look beyond the material to find the eternal.

Truth lasts forever, whether or not it is acknowledged as truth. Joined by truth in this are beauty and goodness.

The music I listened to in that store falls into the category of beauty. So does Pietà, the sculpture pictured here. Michelangelo created it in 1498-1499, around 200 years before Pachelbel’s Canon in D. And that magnificent work of art also contains goodness. Can you see it?

About 170 year before that, in 1305, Dante Alighieri began work on one of the great lyric poems of all time. He worked on it for 15 years, and he called it The Divine Comedy. That amazing piece contains truth, goodness, and beauty.

It used to be that culture meant a good social education. Now culture is simply a set of norms, and those norms change from place to place and time to time. Still we hold on to our culture, in large part simply because we know it. I get it.

A snob is a person who believes their tastes in a particular area are superior to those of other people. There are wine snobs, beer snobs, sports snobs, and political snobs. I was a cultural snob, because I believed my culture was superior. Then I heard that music.

How can you tell the difference? As the culture of another time would have said, “That’s the $64,000 question.”

Start with a little self-examination. When you move to a new town or state or company, do you take your culture along? If so, do you try to get everyone in the new place to accept your culture? Do you say things like, “We always did it this way”? If so, you may be a snob.

On the other hand, if you see things in your culture that have no vestige of truth, goodness or beauty in them, you may have identified a need for change.

Focus on the good

There are many businesses today that are selling their ability to change your corporate culture. Most of what I see are external changes that may have a short term effect. If you really need to change your culture — from family to country to company — I recommend staying away from quick fixes.

Focus on the good, because that brings a deeper, longer lasting change. We can help with that, of course, and we’d love to, but you can do a lot on your own. Start by not being a snob about your culture and opening your eyes and ears to great music, beautiful art, and words that are true. Incorporate truth and beauty and especially good into your company, and the culture will take care of itself.

Do good. It’s in you, and you can add it to your family, your company, and your country.

And the answer is…

Are you passionate about something? I hope so.