I was having lunch with three other men after a golf tournament. One had been my partner, and we’d been paired with the other two. Since we hadn’t been playing socially part of the lunch conversation was, “What do you do?” and it started with me.

So I told them about Do Good University and what we do here. Then I passed the torch to the fellow on my left asking what he did for work.

He had been a bar owner and now has a wrought iron products company. I almost said “You’re still in the bar business,” but I let it go. 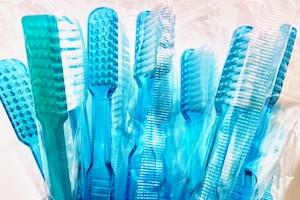 Then I said my golf partner was a dentist but is now retired. The bar man said, “You must have had a lot of people who didn’t like you.” Which reads a little hurtful, but there was no meanness at all in his voice.

The former dentist smiled and said, “You need to have plenty of self esteem.” He explained that dentists generally get very few compliments on their work. His satisfaction, he said, came from knowing he did a great job for that patient.

So I told my friend that I had said something nice to my dentist and that he seemed to really appreciate it. Knowing now that such things are not common, I understand why a little better.

I said I told him, “I don’t know what other choices you had in life, but I’m glad you became a dentist.”

The power of a word

Let’s say you weigh something over 100 pounds. If you’re a grown man you may be closer to 200 pounds. In either case, isn’t it amazing that a few well chosen words can make you float? 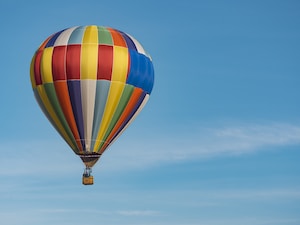 You may not physically lift off the ground like Dumbo, ears flapping, but you become lighter. Burdens fall from your back, heaviness falls from your heart, and whatever was holding down the corners of your mouth leaves the room.

The flight may be brief, but the feeling of it can stay with you, sometimes for years. It may not be at the forefront of your mind, but you can still recall it and it can still have an effect.

In fact you might take a moment right now to remember a compliment that made you float a little. Go ahead, I’ll wait.

Isn’t that amazing? And you probably have several you can choose from, some more recent than others. My point in all this is obvious: an honest compliment is, as the bar man understood, a simple way to do good.

When I told my dentist what I did, I was being honest. A dentist once dislocated my jaw, and I’m still a little wary when I slide into one of those chairs that look like the one where Cleopatra met an asp. 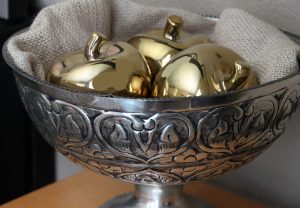 There is a “picture” proverb in the Bible that says, “A world fitly spoken is like apples of gold in a setting of silver.”

Other translations have it as golden apples in a silver basket, or on a silver tray.

They might be real apples or they might be pure gold, but either way they are a desirable and beautiful gift.

All of us recognize that giving time, talent and treasure are important ways we can do good, and they really are. We can add “a word fitly spoken” to that category.

And here is something that makes giving a good word to someone especially fun: no one ever asks for it.

Do people ask you for your money? (Rhetorical question.) Do they ask you for your time and your talents? (Ditto and ditto.) Sometimes people will ask for advice, or they’ll ask for feedback, and those may be openings for a good word. Generally, though, people don’t go around fishing for praise.

It is the right word said the right way at the right time unsolicited and unexpected that wins the day.

These days most of the caddies on the PGA Tour are professionals. Some of them have been out there a long time, but there are always new caddies trying to find a pro who will give them a chance.

Of course those rookies make mistakes, and one of the biggest by far is “the negative word.” Simple examples of negative words include don’t, trouble, problem, and miss. A caddie who says to the player, “Don’t hit it to the right because there is trouble over there. Even missing a little to that side would be a problem,” may well lose that job on the spot.

Even “Don’t miss it short” is anathema. Why? Because golf is very much a mental game, and any negative thought introduced into the equation can have a negative effect.

I once caddied for a friend in a pro event, and I knew the unwritten “only positive talk” rule. But when she hit one less-than-perfect shot my inner teacher jumped out. He said (I swear it wasn’t me), “A little quick in the transition.” Golly! She probably would have fired me if we’d been closer to the clubhouse.

My observation was accurate, but that isn’t the point. She knew what she did wrong and didn’t need me to tell her. The look she gave me caused me to wonder if I might use one of her clubs to dig a hole and hide in it.

She played fine the rest of the way, but I was traumatized by my own “helpful” comment.

It seems to me that every day we have many opportunities to say something uplifting (my compliment to my dentist) or something upsetting (my comment to the pro).

Make the right choice, and you can make someone else’s day.

Start giving out apples of gold. It’s a wonderful and fun way to do good. And it’s in you.