On Wednesday of this week, Donald Rumsfeld died at the age of 88. 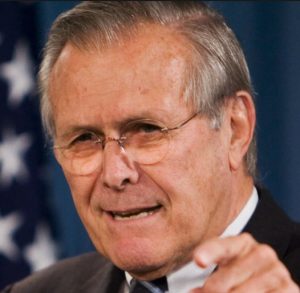 He had been Secretary of Defense under two different presidents, had been a member of Congress, and had run for president. When America was attacked on September 11, 2001, he was in the Pentagon. A plane was purposely flown into that building and people were killed. Rumsfeld, the most senior person there, was safe but ran back into the building to help others.

As news of his death reached the general public, pundits took advantage of the opportunity. They did not use it to extol the virtues of the man. They did not express sympathy for his family. Instead they used social media (some used main stream media) to say how awful he was. And they were not polite about it.

There are always critics, and that’s fine. The negative comments disappointed me for their lack of decorum, but did not surprise me. On the other hand I was taken aback that the negative criticisms were the story. It was almost as if the death was simply the vehicle — an “Oh, by the way.”

Rumsfeld was a major character in modern American history. Love him or hate him, the story should have been about him. Instead, the story lead was a list of tweets, all written by people trying to outdo each other in clever vitriol.

Land of the free

I’m pretty sure July 4th was one of Donald Rumsfeld’s favorite holidays. It is one of mine because I love America and I love being an American.

Over the years I’ve been fortunate to travel to many other places in the world. Because of her work, my wife has traveled far more extensively than I have. Both of us have noticed that the great majority of people in other countries hold America in high regard.

One of the many reasons for that is freedom. Freedom of speech and freedom of religion are two of the biggies. Those rights simply do not exist in many parts of the world.

Gwen Berry finished third in the Olympic trials (hammer throw) and made the US team. During the ceremony she turned away from the American flag. Had she been developed and trained in China (or most of the rest of the countries in the world) and protested as she did, you would not see her in the Olympics. She’d be done. Here in America she is free to speak her mind, and others are free to agree or disagree with her.

Freedom of speech allows for both the protest and the responses. Do we know and appreciate how unique and precious that is?

Home of the good

I know, it’s supposed to be “home of the brave,” and it is. But while there are many brave men and women serving in the military, there are also many people doing good.

Just today I heard about two women who had worked together for several years. Both of their husbands needed a kidney transplant. As they chatted 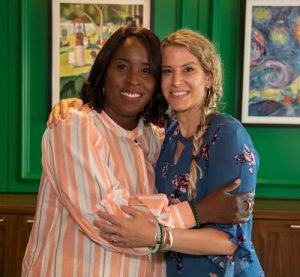 one day they discovered that they might be a match for each other’s husband. Tests showed they were, and the rest, as they say, is history.

Here’s another one, sent to me by Bill Hanley from Omaha, Nebraska. It’s a beautiful story about a young golfer and his heroic father, written by Dick Chatelain for the Omaha World-Herald.

The father, John Atkinson, played golf and introduced his young son Christopher to it. Cancer got in the way of John’s dream to watch his son grow into the game. With Stage IV lung cancer, John entered a national contest to play Torrey Pines in U.S. Open conditions. Out of more than 56,000 entrants, John’s essay won the hearts of the judges.

“If I can beat America’s deadliest cancer, then I can definitely break 100 at its Open. Everybody will witness a man with a heart of a champion and a soul of a survivor. More importantly, you will understand why you never, never, NEVER give up.”

John didn’t give up, playing that round with Justin Timberlake, Tony Romo and Matt Lauer. He didn’t break 100, either, and he lost his battle with cancer. But he inspired hundreds of thousands of viewers, all three of his playing partners, and of course his son.

Christopher is 18 now, has just graduated from high school, and has accepted a golf scholarship to the University of Nebraska at Omaha. His dad would have been proud.

Good just doesn’t know how to be selfish.

Doing good is almost always about helping someone else. When we see that happen we are inspired to do good ourselves. Science tells us there is no such thing as a perpetual motion machine, but doing good comes close.

There are people in every country in the world who do good. I’ve seen it everywhere I’ve been. But Americans do an extraordinary amount of good. In 2019 of those surveyed, 72% of Americans reported helping a stranger, 61% reported donating to a charity, and 42% reported having volunteered their time to an organization.

Statistics like those are often ignored by the media, whether main stream or social. Bad news sells more papers, gets more eye balls, and stirs more emotions. With freedom clutched firmly in one fist, we can raise it to protest what we don’t like.

We can also raise our voices with good news, with encouragement, and with hope for the future. The goal of a good life, after all, is not to have the most followers. It is to do the most good for the most people.

So Happy Birthday America, and thank you for both doing and encouraging so much good for 245 years. In my book, you’re still the best.

Joseph’s wisdom on good and evil