It probably won’t surprise you to know that I think about the idea of “doing good” a lot. After all, our calling at Do Good University is to teach people the power of doing good, the value of doing good, and of course how to do good.

We do that primarily in companies, but we do it here on our web site as well. And — perhaps another non-surprise — a book on doing good is in the works. (You heard it here first!)

Not only do I think about good, I look for good, and my antennae are up to comments, statements and anything else that rings like the bell called “good.” In fact I just came across a music company called goodcity, and they talk on their site about good music. Good for them!

Allow me to encourage you, as long as I’m here, to start looking for good everywhere you go. Some of you are already doing that, because I get a note every now and then with a message in it about doing good. And I always appreciate it!

Anyway, I was recently on YouTube looking for good. When I’m there and not watching a golf video I often check on Thomas Sowell. I’ve never met the man, but I’d like to. Now past 90 years old, he is still one of the most articulate, well spoken, and thoughtful men I’ve come across. One of his professors and mentors was Milton Friedman.

A tiny giant of a man 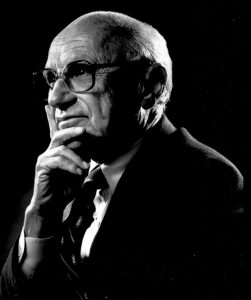 Friedman, who died in 2006 at the age of 94, was only 5 feet tall, but he was a giant when it came to economics. He won a Nobel Prize, he taught at Columbia, the University of Chicago, and Cambridge, he advised presidents, would-be presidents, the Federal Reserve, and influenced countries around the world.

Just reading the Wikipedia entry on him will either give you an education in economics or scare you away from it forever.

OK, back to YouTube. I was looking specifically for some content on civil discourse because I intend to write about that. Several people I’ve had conversations with lately have noted that it is a challenge these days to talk with anyone about something you disagree on. Because I think it’s good to talk with people who have different ideas and perspectives than mine, I try to do just that, and it can be a challenge.

In my search I found a YouTube video with the title How People Used to DISAGREE In the Old Days. It turns out that this video is an excerpt of about 9 minutes taken from a 30 minute program recorded in 1978.

The conversation, which included government leaders, economists, and others I did not know, was about welfare, and there was plenty of disagreement. Some participants were fairly strongly for it and stated their case. Others were not so much in favor and stated their case. Some participants were white, others were black. They were male and female, liberal and conservative. Yet there was no name calling, there were no identity attacks, and everyone was passionate yet civil. It can be done!

This is what Milton Friedman said

Near the end of the video Milton Friedman made a case against the welfare state that I’ve rarely, if ever, heard made. He was speaking directly to a proponent of welfare when he said:

We as human beings don’t have a responsibility, but I hope we have a compassion and an interest in the bottom 20%. And I only want to say to you that the capitalist system, the private enterprise system in the 19th century, did a far better job of expressing that sense of compassion than the governmental welfare programs are today.

The 19th century, the period that people denigrate as the high tide of capitalism, was the period of the greatest outpouring of eleemosynary and charitable activities the world has ever known.

And one of the things I hold against the welfare system, most seriously, is that it has destroyed private charitable arrangements which are far more effective, far more compassionate, far more person-to-person in helping people who are really, through no fault of their own, in disadvantaged situations.

In other words, people stopped (or at least cut back on) doing good in taking care of “the bottom 20%” because the government was taking care of them. And that is still the case today.

I’d like to make two points just for clarification. First, there may well be times when government assistance is helpful. Second, lots of people are still being compassionate and are giving time and money to people in need.

But Friedman was right in 1978 and his statement is still true today. Charitable and eleemosynary (depending on charity, as many ministries and other non-profits do) activities diminish almost directly in relation to the rise of government programs. 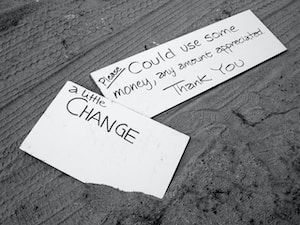 First, we have to develop a sense of compassion for those who are, to use Friedman’s phrase, in disadvantaged situations. Most of us are not good at that. Second, we have to have an interest in helping others. We are not particularly good at that, either.

It is hard to know who really needs help, so we often rely on the wording on a cardboard sign. “Veteran. Kids. Anything will help.” Panhandlers who hold such signs know the words that will awaken our compassion. Some of those people do need help, and some make a six figure income.

Primarily, though, too many people rely on the government to make the decision. Our intentions are good, perhaps, but we fail in compassion and connection.

The bottom line (not quite an economics phrase, but close) is that we need to look for ways to do good. If supporting some government welfare program gets you a “do good” score of 10 out of 100, that’s something. But serving a Thanksgiving dinner at a homeless shelter adds compassion and connection, lifting both your score and your spirits.

Do good in person whenever you can. Don’t rely on the government to get it right or get it done, do it yourself. It’s in you.