A few months ago my friend Mike McGuckin sent me a note about one of our posts. In that note he said he had heard or read this quote:

I only looked briefly for that quote online, preferring to think of it as a quote from Mike, a man of high character. Of course what matters most is not who said something, but whether that something is true. Those words are true, and this week I learned of an example that spanned more than 70 years.

Here is the beginning….

During the most terrible years of World War II, when inhumanity and political insanity held most of the world in their grip and the Nazi domination of Europe seemed irrevocable and unchallenged, a miraculous event took place in a small Protestant town in southern France caled Le Chambon. There, quietly, peacefully, and in full view of the Vichy government and a nearby division of the Nazi SS, Le Chambon’s villagers and their clergy organized to save thousands of Jewish children and adults from certain death.

That paragraph appears on the back cover of the paperback edition of Lest Innocent Blood Be Shed, written by Philip Hallie and published by HarperPerennial.

The “subtitle” on the cover is: The story of the village of Le Chambon and how goodness happened there.

One man stood up 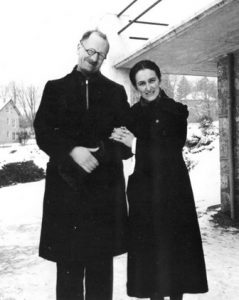 André Trocmé was a pacifist. He was born in 1901, and he met a young German pacifist during World War I who had come to Le Chambon to find a place to live peacefully and not participate in the war. His pacifism was based on his understanding of scripture, and it greatly influenced Trocmé. Eventually Trocmé was ordained into the French Protestant church.

In 1938 he and another pastor, Edouard Theis, founded a pacifist school intended to prepare students for college. At the same time, they were preparing themselves for a challenge they could not have imagined.

In all of these acts, he was not alone. The incident of not ringing the bells in particular is a great story. But there was no “organized” resistance.

Then one day a German Jewish woman came to the door of the Trocmé home. She was fleeing the Nazis, and thought perhaps the pastor would help. Magda Trocmé, the pastor’s wife, took her in. The next day she went to the mayor seeking false papers for the woman, but the mayor refused. The woman had to be sent on her way.

Moved by this event, Pastor Trocmé began to exhort his congregation. He said, “We shall resist whenever our adversaries demand of us obedience contrary to the orders of the gospel.” 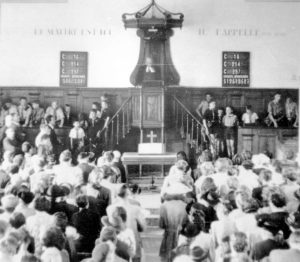 As Glenn Sunshine wrote several years ago, “The Trocmés began to organize an underground network to protect the refugees and provide for them. The Collège Lycée International housed children, and the Trocmés identified families who would be willing to take in Jews. Magda was particularly active in making the arrangements, picking up Jews at the train station, and seeing that they were taken care of. When Jews arrived in Le Chambon, André would announce from the pulpit that X number of “Old Testaments” had arrived, and asked his congregation who would be willing to take them. There were always volunteers.”

The Vichy government was well aware of the activities in Le Chambon, but they never found any Jews there. The villagers would be warned of a raid and take their guests to the woods, returning when it was safe.

When the government demanded that Trocmé and Theis stop their activities, André said, “These people came here for help and shelter. I am their shepherd. A shepherd does not forsake his flock. I do not know what a Jew is. I only know human beings.”

Both men were arrested and held for more than a month. To be free, all they needed to do was sign an oath saying they respected and would obey the Vichy leader. They refused on the second part, and believed they had signed their death warrants. Miraculously, they were released the next day without signing!

The effect of it all 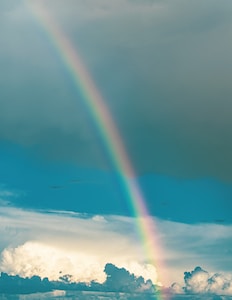 The population of Le Chambon during the occupation was about 3,000, and they saved more than 5,000 Jews, mostly children. That may be a small number in the face of the millions who were murdered by the Nazis, but it is something. It has been called a “conspiracy of goodness.” And it has not been forgotten.

Professor Hallie, the author, was speaking to a group of women in the assembly room of a large hotel in Minneapolis after the publication of his book. They were all leading fundraisers for the United Jewish Appeal.

After his lecture he asked for questions. A woman in the back stood up and asked if this was the Le Chambon in the Haute-Loire, and he said it was.

Then she said, “Well, you have been speaking about the village that saved the lives of all three of my children.” Everyone was silent. She then came to the front and said to them all, “The Holocaust was the storm, lightning, thunder, wind, rain, yes. And Le Chambon was the rainbow.”

That was a significant statement, for the rainbow is God’s reminder that life wins.

Just this past January the town of Le Chambon received a bequest of $2,400,000. It came from Holocaust survivor Eric Schwam, an Austrian Jew who, with his mother, father and grandfather found shelter in Le Chambon. He left the money to the village in his will. He never forgot the village that saved him.

Mike’s quote is true. The good we do is never lost.