Have you ever seen a spy movie where someone plants a tracking device on someone else without them knowing it?

If the hero got bugged, you might have thought, “Be careful, they’re watching you!”

Well I’ve been watching a movie, you are the hero, and there is a tracking device on you. Really.

In many cases that device is on a wrist. More often than that it is in a pocket. You think it is a watch or a phone, and the device may function that way, but in reality it’s a tracking device. You know you have it, but you don’t know what it’s doing.

More importantly, you don’t know what is being done with the information you are giving to the people who collect the data from the device. And that’s the really scary part. 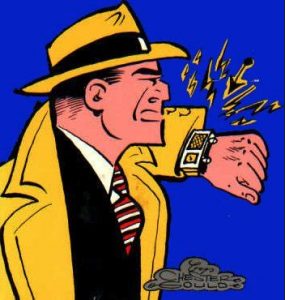 I am not a digital native, I’m a digital immigrant. That is to say, I didn’t grow up with computers. Now I wear one on my wrist.

After all, Dick Tracy wore a two-way Wrist-Radio, as did other members of the police department.

My Apple Watch can call 9-1-1 with the push of a button (ask me how I know!). But it can also show me messages, emails, social media feeds, track my activity, monitor my heart, tell me the temperature, show me my next alarm and my next meeting. Oh yes, it also tells me the time.

In the midst of all of that, it is feeding data to all kinds of places. So is my phone, of course, and sometimes that may be for my benefit.

I get in my car on a Saturday morning and a map pops open with directions to a breakfast spot we frequent. When that first happened I thought it was a little creepy. Then I got used to it.

But it is still creepy.

You see, the information age is like Dick Tracy’s Wrist-Radio — it is two way. I’m getting information, but I’m also giving away a lot of information. The people that are collecting that are using it for profit, and they don’t really know or care if that is for my good or my harm.

What they want is to collect more and more information so they can sell me to the highest bidder. 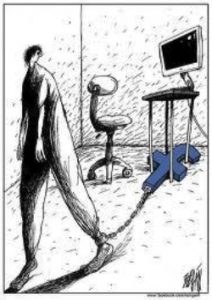 More than 2,000,000,000 people are on Facebook. I was one of the very early adopters, borrowing an email address from a Stanford student to sign up. (Originally you had to have a .edu email.) Everyone knew this would be big, but it was a couple of years before they really tried to figure out how to make money from it.

Advertising was the answer, and over time that advertising has become unbelievably specialized. Much of that is unpacked in the movie The Social Dilemma. You can get a taste of that in the trailer, which you can watch here. Even just that 2.5 minutes is scary. The full movie is at the same link through 9/30.

Because they sell behavior, they have figured out how to manipulate your behavior in order to sell it for a better price.

Remember that map that pops open when I get in my car on Saturday morning? It’s suggesting that I go somewhere. Maybe I want to go somewhere else, and I certainly can, but it is influencing my behavior in real time.

Before browsers or social media even existed, I bought a book called Influence: The Psychology of Persuasion. I thought of it as a marketing book, and I needed that.

But the book scared me right from the introduction. There the author lists six principles used in getting people to comply (he calls them “weapons of influence”), and then writes:

Finally, each principle is examined as to its ability to produce a distinct kind of automatic, mindless compliance from people, that is, a willingness to say yes without thinking first. The evidence suggests that the ever-accelerating pace and informational crush of modern life will make this particular form of unthinking compliance more and more prevalent in the future. It will be increasingly important for the society, therefore, to understand the how and why of automatic influence.

I had long known there were people trying to influence me to buy things, and I vaguely understood some of their techniques. I did not understand that people were trying to take away my choice altogether.

And that is exactly what social media does. But with the power of computing, algorithms, AI, and very smart engineers trained in these principles, social media does it without us, as one Harvard professor says, “even having a clue.”

One particularly vulnerable part of the American population is teens, especially teen girls. Watch two minutes starting here to see how negatively that part of population has been impacted by social media.

The last sentence in the quote above is the “good” part of this battle. In the movie they call it “the collective will,” and they have great recommendations on what we can do.

But I think the first thing we need to do is understand these weapons. According to Influence they are consistency, reciprocation, social proof, authority, liking, and scarcity.

Think about each of those for a moment in the context of social media, and you’ll immediately see their application.

Now the trick is to see them in real time when Amazon recommends a book or YouTube a video or when an ad pops up. Or even a map.

Be alert. Be aware. This is scary stuff, and it is impacting you. You are carrying a tracker, after all.