They say the more things change, the more they remain the same. In a slightly more direct phrase, King Solomon said, “There is nothing new under the sun.”

In an odd kind of way that gives me comfort. Things may well be “going to hell in a handbasket,” but it isn’t the first time and — more importantly — it won’t be the last.

A small illustration bringing these thoughts together popped up in a phone call I had with a friend recently. Back in college David was in theater, and he landed the lead in The Music Man. Now in his 60’s and still an excellent singer, he was discussing genres with some younger men. One of them brought up rap, saying it was new with his generation.

David said, “Not so fast.” And then he did Ya Got Trouble from The Music Man. And, as well they should have, jaws dropped.

The musical, with book, lyrics, and music by Meredith Willson, was produced in 1957 and won 5 Tony Awards, including best musical.

In fact one of the lines in the lyric is, “Gotta figure out a way to keep the young ones moral after school!”

Or even during school?

Wait, maybe that line does indicate some decline after all, because ccasionally today the vulnerability starts in school.

I think that’s the exception, believing most school teachers really want to protect and guide their students on right paths. It is clear, however, that there are school boards — often pressured by political forces — that dictate the curriculum teachers use. And that generally doesn’t serve the students so much as it serves the agenda of those who are pushing that curriculum.

I’ll have to dive into that more deeply sometime. For now allow me to reiterate that if parents care about their children living by a moral standard, they’d better make sure they are teaching it at home.

(In fact CNN reported that Terry McAuliffe, former governor of Virginia who wants the job again, said, “I don’t think parents should be telling schools what they should teach.” Golly.)

Back to River City

The story in The Music Man is simple: Professor Harold Hill is a salesman. Actually he is a con man who has a gig selling non-existent musical instruments so the people of the town can form a boy’s band. His plan is to collect the money, “place” the order, then get out of town with the funds.

In order to promote the idea of a band he seizes on the arrival in town (River City, Iowa) of a pool table! Based on the song (Ya Got Trouble), that pool table is the source of all kinds of temptations for the young men.

…ya got trouble, folks!
Right here in River City
Trouble with a capital “T”
And that rhymes with “P” and that stands for pool!

What can be done about it?

That comes later, primarily in the song 76 Trombones. For now Professor Hill is content to promote the idea of trouble. It’s a classic sales technique: here’s your problem, here’s my solution. And many of those people believed there was a problem.

Do you believe it? 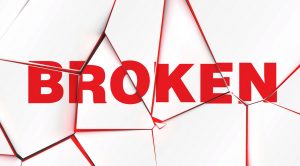 Most of the voices that scream the loudest in the media and online think there are problems, all right, and their solution is to be woke. Too bad it isn’t a boy’s band.

Woke is one group of people telling everyone else what is acceptable in speech, behavior, and life in general. Anything and anyone that fails that standard is to be cancelled. It’s just one reason why woke is broke.

What that means is the protestors of “the way things have been” are setting themselves up as the custodians. Their rules now hold sway, they say.

Cutting through the myriad logical fallacies of the woke arguments on both sides, they say this. “You’re wrong and we’re right.” But they are wrong.

They, like me and you, are human. As such, their attempts at creating some universal (even if the universe is just downtown Minneapolis) set of rules will never succeed.

What woke leads to is a repeat of this verse at the end of the book of Judges:

In those days there was no king in Israel. Everyone did what was right in his own eyes.

We aren’t there yet in America, and I know because of a song in the Bible. It’s called Psalm 14, and it includes these lines:

They have all turned aside; together they have become corrupt;
there is none who does good,
not even one.

Clearly that is not true. There are many, many people who do good in America and around the world. Like you, for instance. So keep being a barrier against the day when “there is none who does good.”

How do we reverse this trend toward “everyone doing what is right in their own eyes?” That’s a big question, but the answer is fairly obvious. Making it happen is the real challenge.

Whether in your family, your company, or your country, an agreement needs to be reached. The critical part of that agreement is a strong moral standard.

The history of civilization teaches us that the moral standard cannot be human in origin. It’s been tried and found wanting, from the earliest histories we can find right up to today.

The standard has to come from God.

Part of God’s moral standard, repeated in the Bible, the Quran, and the Talmud is: Do good.

I was going to write something clever about “pool and that rhymes with fool and the fool says there is no God.” But I’m not the lyricist Meredith Willson was, so I’ll do good, leave it alone and add this instead:

Do unto others as you would have them do unto you.

In other words, do good. It’s in you. That’s a good start.