If you look around, you’ll see that a lot of things are hidden.

Ceiling lights are often recessed in order to be out of sight. Electrical outlets are findable but not prominent. Security cameras are intentionally placed so they don’t draw your eye.

On the other hand many things are designed to be seen. Fire trucks, stop lights, chandeliers, skyscrapers, and “Golden Arches” want your attention.

When it comes to people, the same principles apply. There are people we see and people we don’t see.
Sometimes that is our fault, and sometimes it’s on purpose. Take “White Feather,” for instance.

I can’t remember when I first read about Carlos Hathcock, but I never forgot the story. 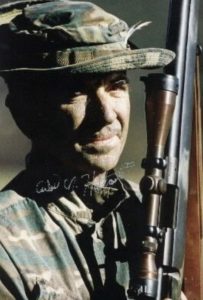 He was a U. S. Marine serving in Vietnam, and he was a sniper. On one volunteer mission he “low-crawled” on the ground for four days and three nights to get into position. Normally he worked with a spotter, but now he was alone.

The closer he got to his target, an NVA General, the more troops he would encounter and the more dangerous it would be.

He covered 2,000 meters — almost a mile and a quarter — all of it inching his way slowly across open territory and without eating. As he neared his position he heard a squad of enemy soldiers coming.

Laying in a shallow, dry ditch, one passing soldier came within a few inches of stepping on him. But he was unseen, and a short time later he completed his mission.

Hathcock was known as “White Feather” because he wore one in his bush hat. When the Viet Cong put a $30,000 bounty on his head, many other Marines added white feathers to their hats in order to confuse the enemy.

And for a time the master of camouflage was even harder to find. 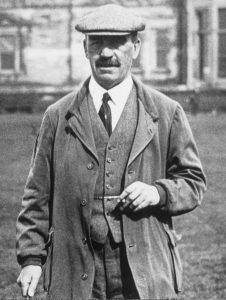 Alister MacKenzie was a citizen surgeon in the Boer War, and that’s where he saw camouflage put to use by the Boer’s. He studied it, and when he served in World War I he became a camouflage officer for England. Some sources suggest the very first.

MacKenzie was a golfer and was very interested in course design. He immediately saw the connection between course construction and military camouflage. Putting those principles into his work, MacKenzie eventually became one of the most prominent golf architects of all time. Three of the courses he designed before 1933 are still in the top 10 in the world.

Most golfers stand on the tee, look down the fairway, and figure they know what to do on that hole. Playing a MacKenzie course requires a little more thought than that. He fools your eye with slopes, with bunkers, with elevation changes. I won’t go into it all, but the man was a genius at what he did.

If Leonardo da Vinci could paint a smile, Alister MacKenzie could erase one. But with afterthought, the hole that just fooled you will bring a smile — one that is a little more wry — to your face.

All of this “camouflage” thinking came running through my mind when I accidentally visited Yahoo! News.

Virtually every headline was negative in tone or written to engender anxiety of some kind. The only saving grace was that every fourth “headline” was an ad, and some of those were a little friendlier.

Where, I wondered, is the truth?

It was there, but it was disguised. Apparently the truth just doesn’t sell. Which reminds me of a great quote:

Click-bait headlines aren’t camouflage, they are misdirection. It’s much more like what a pickpocket does than a soldier.

What about the baby Jesus? 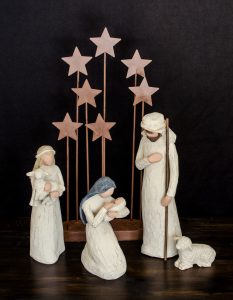 So, with my mind focused on misdirection, camouflage, and how we often see but don’t see, I thought about Jesus.

This is posting just before Christmas, 2021. Around the world people are celebrating the coming of Jesus the Christ. Likely born in a stable, the baby Jesus was laid in a feed trough. His first visitors were shepherds, the lowest members of society.

His birth was prophesied 700 years before it happened. The angel told Mary to name him Jesus, which means God is salvation. This is, to put it mildly, a big deal.

So why the camouflage? Or was it misdirection?

We know that when the Magi (the wise men) showed up they went to the territorial ruler, Herod, to ask for the whereabouts of the new king. They knew it was a big deal, and they assumed the king of the area would know all about it. He didn’t, but he wanted to.

Was that why God kept Jesus’ birth on the down low? Were the shepherds invited because Jesus was one of them or because no one would believe them?

Was it for safety that God hid Jesus in plain sight for such a long time?

Here we are at Christmas, and because of the season people are talking about Jesus.

That is encouraging to me, because I’m a Jesus guy. Not just the baby Jesus, but the grown-up, died-so-we-could-live Jesus.

Sometimes Jesus people are hard to see because they camouflage themselves. I get that. Other Jesus people are bolder than a stampede, and I kind of don’t get that, but neither seems helpful to others.

Perhaps we can all learn something from the first Christmas, whether we follow Jesus or not.

Be humble. Don’t just go for the big splash with all the swells, but invite the lowly in. Be findable by those who are truly looking. Stay away from those who would do you grievous harm. Be who God made you to be.

This Christmas give some thought to the coming of Jesus and think about how extraordinary it was.

Perhaps, like me, you’ll conclude that his is a birthday worth celebrating. No camouflage needed.