The old saying tells us that “the Good Lord gave us two ears and only one mouth, so we should listen twice as much as we talk.”

Because that is in fact an old saying, we know that listening has been a challenge for a long, long time.

If you go back to the time of Jesus and study him just a little, you’ll learn that he did most of his teaching using something called parables: “an earthly story with a heavenly meaning.”

Jesus often used this phrase after his parables — “Anyone with ears to hear should listen and understand.”

Even Jesus had a hard time getting people to listen. Thank goodness we’re over that “not listening” thing today!

While I was poking around in the Bible, I checked in with Solomon. Most likely the richest man who ever lived and certainly the wisest, he wrote: Ears to hear and eyes to see–both are gifts from the Lord.

My grandmother and grandfather played a big part in my raising, and my grandmother was deaf. My grandfather was kind of a rascal, and sometimes I think she was thankful for the loss of her hearing.

But one day she taught me a wonderful lesson about listening. Know the speaker.

I was eating at a counter in our kitchen and Grandma was washing dishes in the sink, which was just across the counter.

Then I noticed Grandpa sneaking into the kitchen from a door behind Grandma. He put his finger to his lips, giving me the international, “Shhhh” sign. Grandma kept washing dishes.

In just a few steps he was behind her with an impish look, and he leaned in as I watched his performance.

Practically touching her, he said, “There you are, you old witch!”

And just as he started to laugh she whirled around and said, “Don’t you talk to me like that!”

Even though I was now the one laughing, I thought it was a miracle! But it wasn’t, it was wisdom. Grandma knew how to listen even without hearing. 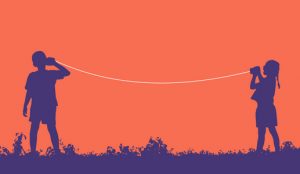 Having the ability to hear should allow us to listen better, but apparently it doesn’t. That is because listening and hearing are different things.

So when my wife asks, “Did you hear me?” I can sometimes say yes and no and be right on both.

But that is a dangerous game, and if you play it with your spouse or your boss or anyone important, you could be in trouble.

That is because the biggest difference between hearing and listening is not found in the list above.

The difference I refer to is this: listening shows that you care.

There was a time when I liked to watch presidential debates, but that time is long past. I’m not sure we’ll ever again understand the nuances of good debate in that realm, because we rarely listen for content.

Neither do the candidates. They are listening for trigger words to which they can respond with a canned speech. Answers have become predictable, and the winner is the one who seems more confident and looks better on camera.

Unfortunately that has become the model for political discourse in general. No one wants to listen, they want to make points by talking about their position. 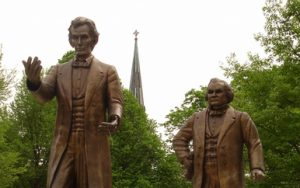 In 1858 Abraham Lincoln and Stephen A. Douglas traveled 4,000 miles around Illinois and debated each other seven times. It took almost three months, and tens of thousands watched those debates. Everyone read them in the newspapers. (Which, for the most part, reported the debates rather than participating in them.)

There was only one issue then, and it was slavery. But it wasn’t as simple as one candidate (for the Senate) being for it and one being against it. There were nuances, and there was therefore room for debate.

Almost everyone I know has someone in their family who disagrees with them politically. They have learned to get along, but have they learned to have a conversation and listen? Not so much.

Here are the Do Good U basics on listening, and I hope they help you.

The first ingredient in listening is to be present. I don’t mean just in the room, I mean focused on the person speaking. All of us know what it is like to appear as though we are in a room when our minds are somewhere else. And all of us know what it’s like to talk to someone while they look at their phone.

The next ingredient is to commit to listening actively. This is something you have to decide to do.

Step three is to assume a listening posture. If you cross your arms, lean back in your chair, etc., you do not look receptive. And you probably aren’t.

Next make sure you are looking at the speaker. Eye contact will help your ears hear better.

Once all of that is set, you have three more things to do. One is to not formulate an answer while the person is speaking. (That one is tough for me and many others.)

Another is to encourage the other person to say more. You can do that by repeating what they say and then asking if that is correct. Once they’ve run out of statements, they’ll stop.

And once you truly understand them, you can ask questions about their statements. If they can’t defend them without you arguing for an opposing point, you will have won without firing a shot.

On the other hand, maybe you will have learned something from what they had to say.

But you’ll never know unless you listen.