When Vladimir Putin invaded Ukraine two weeks ago, I wrote about it here. I said we should care, and I gave some reasons why.

One reason I listed was this: Evil must be overcome with good.

Some of my friends who have more than a passing knowledge of the history of Ukraine wondered if this was evil versus good or worse evil versus lesser evil. But they all agreed that the unprovoked invasion of a sovereign nation was evil. 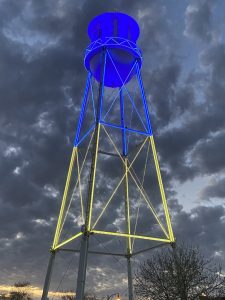 The world at large has agreed with that assessment as well. The water tower pictured here is the symbol of Gilbert, Arizona, my home town. And for now it also stands for Ukraine.

There has been no small amount of speculation as to why Putin thought he could do this and get away with it.

Of those I’ve read, one that makes a great deal of sense is that last November America openly supported Ukraine becoming part of NATO. Putin hated that, and hated America even more for doing it.

Additionally, NATO membership would affirm Ukraine’s sovereignty. (They are already part of the UN.) Putin insists Ukraine is part of Russia. He refers to it as “the Ukraine” in the same way we’d say “the Grand Canyon.”

Of course Putin would love to dismantle NATO itself, and the West in general, so grabbing Ukraine now made sense.

Putin also apparently thought the response from the West, especially America, would be weak. He seemed to believe he could send in his troops and have Kyiv under his control within a few days. 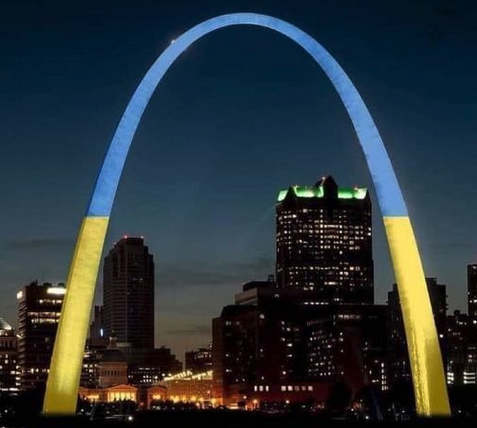 Bullies rarely think anyone is going to stand up to them, especially a bully like Putin. He has used these tactics for too long with too much success for them to fail here.

But in many ways they are failing, and that is because of good.

One of Putin’s main tactics is demoralization of the citizens of Ukraine. Much of that is accomplished by targeting civilians, which he has done repeatedly. This, too, has turned against him.

A few days ago Russian troops shelled civilians on a “protected” escape route. Tetiana Perebyinis and her two children, 18-year-old Mykyta and 9-year-old Alisa, along with Anatoly Berezhnyi, a 26-year-old church volunteer trying to help them to safety, were killed.

A New York Times team of journalists was nearby when it happened. One of them, Lynsey Addario, took a picture. She thought to herself that it was disrespectful, and hesitated. But she also recognized it as a war crime, which it was.

That photograph has galvanized countless numbers of people, and the Times has written about the lives of the four victims.

Anatoly, the church volunteer, was an IT professional. He also served in the media ministry of the Irpin Bible Church, northwest of Kyiv. Anatoly had successfully evacuated his wife and other family members, but returned to Irpin to help at the church and serve others.

As Tetiana was taking her two children across the bridge, Anatoly offered to help carry suitcases.

And now Tetiana’s husband, who was in another part of the country helping his mother, and Anatoly’s wife have lost their families.

Has that demoralized Ukrainians? Apparently it has had the opposite effect. Sacrifices are being made, and in some cases it is the ultimate sacrifice. Even if Putin doubles down and assumes control of Ukraine, he will never control the Ukrainian people.

I have seen a picture of a school teacher in a bunker in Ukraine teaching her students. One picture I saw just today (shown here) is of a little girl in a makeshift bomb shelter. She has become known worldwide for singing Let It Go (from Frozen) in that shelter. Here is a link to the video on Twitter, viewed more than 16 million times.

She, too, has inspired people far and wide to stand against evil.

And people have responded in amazing ways. Not only have many given money, people from around the world — and especially people in Poland — have opened their homes to refugees.

One friend was telling a group of us this morning about one such family. They themselves have been in Christian ministry in Russia for some time, and they knew they needed to leave. Finding shelter in a neighboring country, they have taken in several other families from Ukraine. Now, my friend said, they need money for food and for gasoline for all the trips they are making. 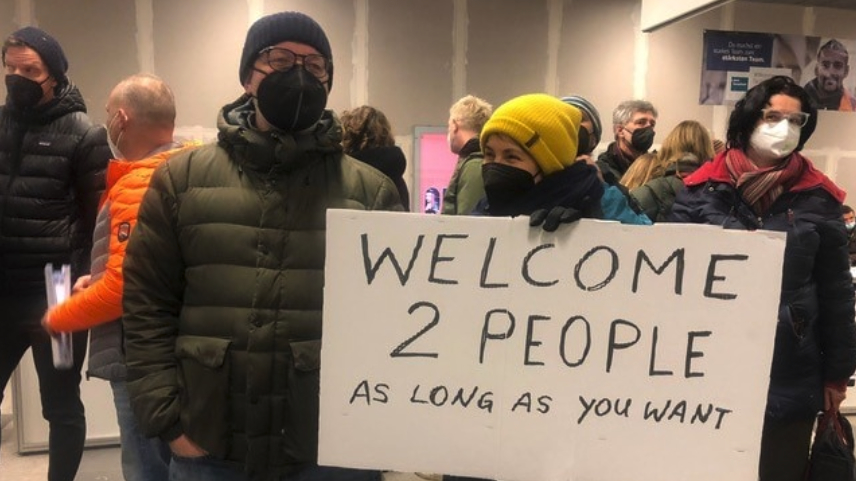 The couple in the picture here are among the many who have given of themselves to help those who have had to flee their homeland.

At the same time, more than 50,000 have gone into Ukraine to help offer services there. Some of those are volunteering to fight, others are volunteering medical services. All of them are giving themselves.

Good is rising up in the midst of this evil, and it is gaining strength.

Many people I have spoken with about Ukraine have been moved to help in some way. My advice is always the same — pray.

Pray for strength and provision for the refugees. Pray for safety for the civilians caught up in the war. Ask God to give wisdom to leaders around the world. Pray for evil to be defeated and good to prevail.

Make your prayers real by putting yourself, mentally, into the place of those you pray for.

And every day stand against evil by choosing to do good.