Always I wonder how long I would last, and I’m thankful I’m not a spy.

Still, there are times when we all treat some information we have as “classified.” We keep it close, sharing it rarely, if ever.

There is actually a lot of that going around. Sometimes it is understandable, but is it good?

It’s a given that there are mountains of misinformation in the land called Social Media. Not all of that is political in nature, though politicizing everything is popular these days.

Misinformation is simply incorrect information. Not every mistake by every journalist is “fake news.” 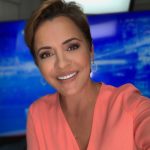 When I was a young boy my grandfather would say, “It must be true because it was in Reader’s Digest.” He said it as a joke, of course.

Now I say, “It must be true because it was on Twitter.” It’s an homage to my grandfather. Social media, in case you don’t know, is a horrible place to get accurate information.

There is also a lot of misinformation in professional media. Sometimes that is intentional and sometimes it’s just sloppy. Kari Lake was a very popular Phoenix newscaster for many years. She famously quit her job a year ago, basically over misinformation.

“I found myself reading news copy that I didn’t believe was fully truthful, or only told part of the story. And I began to feel that I was contributing to the fear and division in this country by continuing on in this profession.” So said Ms. Lake in a video where she explained why she left her job.

Many people I talked to appreciated her candor. Misinformation is real, and sometimes even the reporters know it. 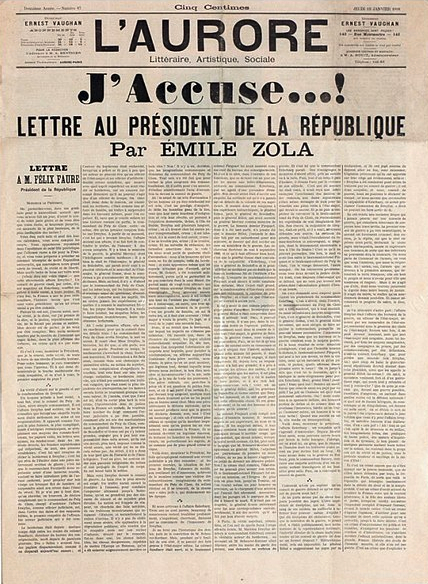 J’ Accuse is French for “I accuse!” It was the front page headline of a French newspaper on January 13, 1898. That page consisted solely of a letter written by Emile Zola, a famous French novelist. The letter was addressed to the President of France and accused his government of antisemitism and unlawfully jailing Alfred Dreyfus, a Captain in the French artillery.

It may well be the mother of all opinion pieces ever published in a paper.

And it made a difference. Dreyfus was fully acquitted in 1906. Can you imagine any newspaper publishing a letter like that now?

A few days ago we learned that Mr. Putin added nine years to the sentence of Alexei Navalny, Russia’s leading opposition figure. From behind bars he has been opposing the invasion of Ukraine.

Of course there will be no J’ Accuse! written to Mr. Putin and published in a Russian newspaper. There is no free press to do so.

Consequently some voices from free countries have spoken out against Putin. One of the very best of those is a video by Arnold Schwarzenegger. You may or may not agree with everything in his video, but it’s powerful.

One of the things “The Governator” said is that Putin is telling the Russian people lies. And in fact he is.

The Wall Street Journal reported on the rally that he held on March 18. You can watch video of the rally, during which he quoted the Bible in praise of the Russian soldiers who have died in Ukraine.

He also told several lies about why Russia is fighting in Ukraine. Those included accusations of genocide and neo-Nazism, both of which are the lies he used when he invaded Crimea and Donbas.

Disinformation is an outright falsehood. It is done with intent, and Putin is not the only politician to have used it effectively.

Disinformation hides the truth by putting false information in its place.

Misinformation obfuscates the truth. That is to say, it muddies the waters, making the truth less clear. As I noted, sometimes that is done intentionally and sometimes not.

One way to tell whether you’re dealing with mis- or disinformation is to ask this question: Does the person speaking know the truth? When Putin speaks about why Russia invaded Ukraine, the answer is yes. If he says anything other than what agrees with reality, it’s disinformation.

When a reporter relies on “sources” rather than first-hand information, the reporter may or may not know the truth. We tend to believe reporters, because for many years they have proved to be reliable. But they don’t always know. We should remember that.

Were they themselves misinformed, or was this intentional disinformation? It depends on who you ask.

Who can you trust?

This is a big question for many people. It is almost easier to figure out who you can’t trust. One such group (for me, at least) is people who say, “Trust me. I’ll do it for you.”

High on that list is a company called NewsGuard, and if you use the Microsoft Edge browser you may be relying on them. Chrome has NewsGuard as an option. 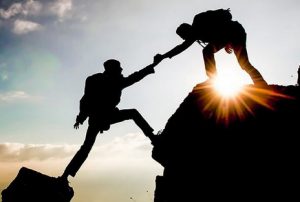 On the other side, you should not mistrust a site or person because they disagree with you on one thing. I read a daily briefing from the New York Times. Generally I don’t agree with their point of view, but I don’t think they usually hide information. Hunter’s laptop notwithstanding.

Besides, if I only listen to people who agree with me, how will I test my beliefs?

Most importantly, though, you need to be trustworthy. In order to do that, you will have to expose your beliefs. Don’t give disinformation, try not to give misinformation, and don’t hide information.

People do, you know, for fear of being cancelled or disliked. Don’t fall into that trap. Be authentic, be truthful, and be able to explain and defend your beliefs.

What a Nobel prize winner said about doing good