So there I was, sitting at my desk ready to write about “think different,” when I got pulled aside by LinkedIn.

LinkedIn is a business-focused social-media site. At least I describe it that way. Although I have an account on most social-media platforms, LinkedIn is the only one I’m active on. And I’m not all that active there, though I probably should be.

What pulled me away was a post from a friend titled (wait for it…) “think different.”

You can see, perhaps, how that got my attention. 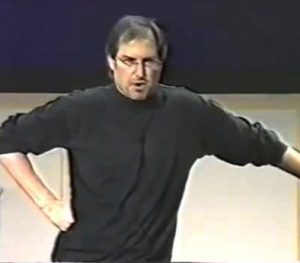 The post, as it turns out, contained a seven minute video of Steve Jobs addressing many of the Apple staff. The year is 1997, and he is telling them about an ad campaign that their agency (Chiat/Day) created for their brand. This was not about a product, it was about the company.

The title of the campaign was “Think Different.”

Although I was already a fan of the line, it wasn’t what I was going to write about. Mention it? Of course. Focus on it? No.

But part of what that brand campaign is about definitely fits. Besides, who can ignore the divine providence that had that clip come across my desk at exactly that moment?

Twenty five years ago Steve Jobs stood in front of his people wearing a long-sleeved pullover shirt. That looked normal. Then the camera pulled back and you could see he was wearing shorts. That did not look normal.

The signature look came later. But it was still his speaking style — very comfortable and authentic — and he conveyed his idea clearly: The people who have changed the world have thought about things in a different way.

The title of the first ad in the Think Different campaign was “The Crazy Ones.” Pictures included Einstein, Martin Luther King Jr, Gandhi, Muhammad Ali, Bob Dylan, and others. The implication is that Apple, though a company, is just like those people.

Had that ad been made today, could it have included you?

I’m kind of proof of it, sitting in a coffee shop typing on a fanless MacBook Air. But does that change the world? Probably not.

Do you see that?

In Apple’s ad, the idea is that extraordinary people with “different” thinking have helped change the world. For the most part, that is a good thing. Although the Apple ad mentions “troublemakers” I’m pretty sure they would not have included Adolf Hitler as a model. Nor should they, because that kind of different has other problems.

What I’m saying is that ordinary people can change the world, too. And they can do it by thinking different. Not innovative or inventive thoughts necessarily, but thoughts.

That is because today we live in a world filled with opinions but lacking in thought.

Dr. Ken Jeong is a big part of the comedy as a judge on The Masked Singer. He often makes the audience and the other panelists laugh with his wit and the shtick he’s created for himself. This week he let his emotions override his professionalism.

In the show a celebrity gets outfitted in an elaborate costume, clues are given to help identify them, and they sing. In the episode that aired this week, there was a special guest appearance. The panelists all guessed who it was, and they were all wrong. It was Rudolph Giuliani, former mayor of New York.

Ken Jeong is not a fan. I know that because he stood frowning at Giuliani for a minute or so, then said, “I’m out of here” and walked off the stage.

And that is an example of how people behave when they act without thinking different.

Life from both sides?

The song says “I’ve looked at life from both sides now.” While there are more than two sides to life, that is one more side than most people bother with. And the side we look at life from is our side.

Driving home recently I got behind a car that was behind a pickup truck. There are thousands of pickups in Phoenix, so I know they are generally capable of great speed. This one seemed not to be.

The car between us finally was able to pass, and I couldn’t wait to get up next to that truck and see the person that had annoyed me for the last three minutes. I mean, after all.

Then, in a moment of adulthood, I thought, and I realized I was looking at life from my side alone. You see, that kind of flawed “my way” mindset, devoid of considering the other person, is not reserved solely for TV personalities.

And neither is the antidote, which is thinking different. That is to say, thinking about someone or something other than yourself.

If enough of us would just do that — think about others, which is to think different — the world would change.

There would be more of opening the door for others, both literally and figuratively. There would be much less of me first, much more listening. Opinions long held might give way to new understanding and be adjusted.

It is a wonderful thing when an Abraham Lincoln comes along, or an Einstein, or a King Jr. But we don’t have to wait for “The Crazy Ones.” We can be crazy all by ourselves.

All we have to do is think. That’s different, and that’s good.