The world, you probably know, is a very serious place. That’s why they call that baseball contest The World Serious, I suppose. (Rim shot.)

I don’t know why we seem to have gotten so serious and laugh so little these days, but here are possible reasons:

On 60 Minutes this past Sunday there was a segment on Birds Aren’t Real. Notice, please, that this fine group does not use an alphabet name. They proudly state what they stand for and believe: all birds are government spies. 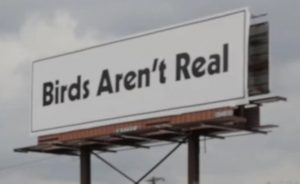 Peter McIndoe, the fellow who started the whole thing, and his friends have done a great job with this conspiracy theory. They posit the idea that some of the drones disguised as birds recharge on power lines. Makes sense to me.

McIndoe interviewed a “former CIA” operative who confirmed the program. Between 1959 and 2001, the government killed (“genocided”) birds and replaced them with drones. Twelve billion of them. No wonder the government knows so much about all of us.

Of course the entire thing is satire, though there are a few people who believe the message.

Why use satire? In the words of the Birds Aren’t Real leaders, they are fighting lunacy with lunacy.

And they are not alone. The Babylon Bee is one of the best and funniest satire sites online. They keep up with the news like nobody’s business, and they can and do satirize anything and anyone.

In the political realm, they have skewered both Biden and Trump. Naturally they jumped on the leaked draft indicating a possible overturn of Roe, and they’ve been all over Twitter and Elon Musk.

If you are reading this, you were alive from the very beginning of the Covid pandemic. You were also alive for the first of dozens of conspiracy theories about the pandemic. They still abound.

Which ones are true? It may take a long time to answer that question.

Did scientists in China create the virus on purpose? That, like almost all conspiracy theories, sounds plausible. But the reason it’s called a “theory” is that the truth is not available to the general public.

Was Dr. Anthony Fauci on China’s payroll? No. Did “big pharma” help create Covid so they could make a profit? Also no.

We haven’t even scratched the surface on Covid conspiracy theories, and it is just one topic. 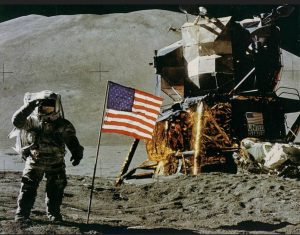 My father was a Sunday School teacher in Illinois in 1969 when man first landed on the moon. One lady in his class at church said, “I know that had to be fake!” My dad asked how she knew.

“They showed a short film and said it was from the moon. That can’t be real, because I can’t even get New York on my TV, let alone the moon.”

When we can’t get an answer that satisfies us, we are more likely to embrace a conspiracy theory. All of us like answers, and conspiracy theories are quite definite about what has happened.

Also, sometimes conspiracy theorists get it right. John Lennon was spied on by the FBI. But so were lots of others. And now it’s even easier for the government to spy on people, because Birds Aren’t Real.

Laughter, the best medicine — and more

Humor is all about the unexpected ending. Like the two old married couples who were going out to dinner one evening, with the husbands riding in the front of the car and their wives riding in the back.

The driver was trying to remember the name of a movie they’d all seen a month earlier, and his friend said, “I’ve got this.”

He went on, “I’ve been taking a memory course, and I use association to remember things like that movie title.”

“Alright. I remember the color red. Red reminds me of a flower. I’ve got it — the flower is a rose!”

And he yelled to the back seat passengers, “Rose, what was the name of that movie we saw last month?”

As Reader’s Digest says, laughter is the best medicine. It can (literally) help people heal, and it can help bring people together. It is also, as Mark Twain said, a powerful weapon.

Find the humor. Enjoy the laughter. It’s a great way to do good, and it’s in you!