Not long ago my wife said, “I’m going to the Mesa Community College Library book sale. Want to come along?”

For me that was like offering catnip to Kitty. I perked up, my eyes opened wide, and I said, “I’ll drive.”

Book sales in general interest me, but a book sale at a college library is special. And this one proved to be no exception. 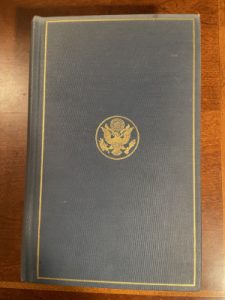 One of the books I found has helped me understand why the colonists declared independence from England. It was published in 1927 by the Government Printing Office in Washington and it has 1,115 pages.

The title: Documents Illustrative of the Formation of the Union of the American States. In the prefatory note we are told why this book came to be:

“Its purpose is to present under one cover the most significant documents relative to the formation of the American Federal States.”

And that it does.

The Declaration of Independence is essentially the document that separated the American Colonies from the rule of England. But well before it was sent to King George III, the separation had already begun. For about ten years King George had pressured the colonists in every way imaginable, from taxation without representation all the way up to the murder of citizens.

For those same ten years the colonists had tried to maintain peace with England and wanted to remain English. But they also wanted to govern their country as they saw fit. It had worked for a century, but it was not working now.

One year before the Declaration of Independence, the Continental Congress wrote a “Declaration of the Causes and Necessity of Taking Up Arms, July 6, 1775.”

If it was possible for men, who exercise their reason to believe that the divine Author of our existence intended a part of the human race to hold an… unbounded authority over others, marked out by his infinite goodness and wisdom as the objects of a legal domination…, the inhabitants of these colonies might at least require from the parliament of Great Britain some evidence that this dreadful authority over them has been granted to that body. But a reverence for our great Creator, principles of humanity, and the dictates of common sense must convince all who reflect upon the subject that government was instituted to promote the welfare of mankind, and ought to be administered for the attainment of that end.

In other words, “Parliament, if God gave you the right to own us, let us in on his message. But we know that isn’t the case, and this isn’t even the way governments should behave.”

and there is more…

After listing a number of injuries, and after reminding every reader that diplomacy at the highest levels had been tried, more and greater injuries are listed. 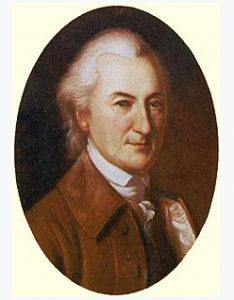 Then it is noted that the colonists “have received certain intelligence” that attacks from Britain and Britain’s friends (Canada, specifically) are imminent. Thus the beginning of the conclusion:

Our cause is just. Our union is perfect. Our internal resources are great, and, if necessary, foreign assistance is undoubtedly attainable. …

With hearts fortified with these animating reflections, we most solemnly, before God and the world, declare, that [using the] energy and powers which our beneficent Creator hath graciously bestowed upon us… [we will take up arms] for the preservation of our liberties.

With an humble confidence in the mercies of the supreme and impartial Judge and Ruler of the Universe, we most devoutly implore his divine goodness to protect us happily through this great conflict, to dispose our adversaries to reconciliation on reasonable terms, and thereby to relieve the empire from the calamities of civil war.

The document, by the way, says it was written not for parliament, but because “we esteem ourselves bound by obligations of respect to the rest of the world to make known the justice of our cause.”

The document was written primarily by John Dickinson (pictured here) and is online at this link.

…and after the Revolution

Like the Declaration of Independence, this declaration lists many of the reasons why the American colonies separated from England. It was far more than taxes.

It was one nation — England — attempting to take over another nation. That is the way the colonists saw it, and in fact historically the way it was.

If it reminds you of Russia attempting to take over Ukraine, you are not alone. Ukrainians feel exactly the same way the colonists felt in 1775.

The Revolution was what allowed America to become it’s own nation. This is our history, and I believe far too few Americans today know anything about it.

Here is what James Madison wrote about that in his extensive notes on the convention (also in my book!):

General Washington was accordingly unanimously elected by ballot, and conducted to the Chair… from which in a very emphatic manner he thanked the Convention for the honor they had conferred on him, reminded them of the novelty of the scene of business in which he was to act, lamented his want of better qualifications, and claimed the indulgence of the House towards the involuntary errors which his inexperience might occasion.

Compare the writing above to a Joe Biden press conference or a Donald Trump tweet, and you will see how far we have fallen in articulating our beliefs.

Compare the humility of George Washington to the bravado which boils over today in the city named for him, and you will see how far we have fallen from grace.

Many in the American colonies gave their all in the Revolution and sacrificed greatly in forming this nation. We should know something about that — not for our glory, but for their honor. And so we don’t live in a way that might one day require another revolution.