My wife and I were having ice cream with friends in a strip mall shop. We’d been to dinner and were finishing off the evening with a couple of the 31 available flavors when the door blew open.

To be fair, the man who came in with the wind might have put his hand on it. He was only a few feet from me, he was wet, and he was happy to be inside. 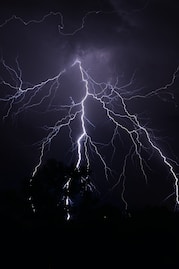 He turned to me and said, “I recommend that you all stay as long as you like. You do not want to go out in that!”

Workers in the store came out from behind the counter, customers peered through windows, and one brave soul opened a side door for a better view. Everyone agreed that inside was better.

About 20 minutes later the worst of it seemed to be over and we decided it was time to head for home. On that drive we saw miles and miles of lightning. Most of it had multiple forks and lit the sky with a temporary but brilliant and captivating light. Driving was already interesting because of water in the streets and downed trees. The distraction of the flashes didn’t help that part, but created a sense of awe anyway.

I turned to my wife and said, “And we think we have power.”

Not far from the ice cream shop is a golf club where I play. The next morning there was a message from the club that it was closed for the day because of the storm. Power was out, there were some trees down, and there were broken branches that might fall. 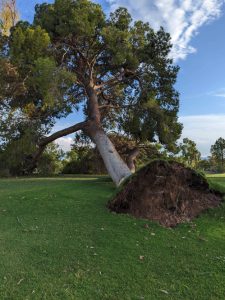 There are a lot of trees on that particular course, which opened in the late 1940’s. The morning after the storm there were eight fewer than the day before. Some of those were more than 40′ tall. It only took one morning to restore electricity, but it took three days to clean up the course.

All of that happened in a matter of minutes. Anyone who has been part of a “natural disaster” can tell you the time is often short.

A friend of mind happened to be driving on a Bay Area highway in 1989 when the “World Series Earthquake” hit.

He saw the road — a solid concrete pavement with streetlights — roll in a wave like giant ripples. He said it was as if the earth was liquid.

The Bay Bridge collapsed, 63 people were killed, more than 3,700 were injured, and all of that happened in about 15 seconds of shaking.

You get the point, of course. The destruction of things we’ve built that seem solid and permanent takes but a moment.

Sadly we don’t just think we have control, we act like it and we spend a lot of time, effort and money to prove it.

Take climate change, for instance, which (in case you are confused about the terminology) includes all kinds of things. One of those is “global warming.” 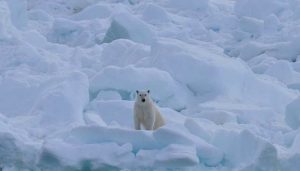 According to an article on NASA, global warming is only about the increase in temperature on the earth’s surface that is due to greenhouse gases. It was first used that way by a fellow named Wallace Broecker. He published an article in 1975 with the title The Sky is Falling!

I’m kidding, of course. He did raise an alarm, though, in Climatic Change: Are We on the Brink of a Pronounced Global Warming?, which was published in Science.

Many people have taken up that cry over time, and Al Gore was one of them. He gets to take some of the heat (pun intended) for this because he shared in the Nobel Peace Prize. In 2008 he told a German TV audience, “The entire North Polar ice cap will be gone in five years.”

Since 2012 both ice caps (the Antarctic is much larger than the Arctic) have actually grown considerably, NASA says.

Truth you may think is inconvenient but isn’t

The reality (and Science published this as well) is that the position of the sun relative to the earth is the reason for shifting climates. We have thousands of years of data to support that.

But it is far more fun to blame warmer (or cooler) temperatures on something we think we can control: people and their behavior.

In addition to Climate, here are some other C’s where government control is an illusion: COVID, eConomy, and Conflict. I’ve coined the word Cortezians to denote those who seem to think government should control pretty much everything.

Here is that truth I mentioned, and it is good news: Much government overreach would be obviated if we simply took responsibility for our lives, for each other, and for our planet.

I’m not so naive as to think government would shrink naturally if we began to live the way we should, but it would be a great starting point. (More on that next week.)

What if we all decided to do good? That would mean not littering, individually or corporately. It would mean we would use all the resources we have wisely, not wildly.

By the way, doing good should apply to the government and all elected officials as well.

Good would care about not just the room or the house we live in, but also the town. We would take our current neighbors and future generations into consideration when we make decisions.

In short we would grow more selfless individually and collectively. We would hug each other instead of trees.

Imagine most people on earth being a good steward of the environment. That would be a climate change we could all support.

Do good. It’s in you. And it’s good for the world.