Even little kids know what it feels like to have a problem they can’t solve.

I experienced that many times, once in particular when I was 12 years old.

The neighborhood where we lived had a small creek running through part of it, and next to that creek was a big, old, tree. There was a slope from the sidewalk to the creek, but the tree grew straight and tall. From one of the branches on the high side hung a rope. Close to the ground that rope had been tied into a huge knot — big enough to make a seat one person could sit on and swing. 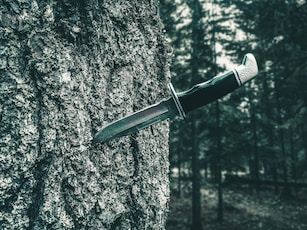 My buddies and I liked swinging on it, but that wasn’t very adventurous. So someone invented a game called “stick the knife.”

It’s played like this: the first boy swings on the rope holding on with one hand. In the other hand is a knife. He swings close to the tree and, somewhere in flight, leans over and sticks the knife in the tree.

Simple, physically challenging, and just a hint of danger. Perfect for little boys.

One summer day my buddy and I were playing stick the knife, and it was my turn. With a big swing and laying almost flat, I stuck the knife in a hard-to-reach part of the tree.

Smiling at my great “stick,” I swung back past the tree and dismounted on the fly. I landed on the downslope, and my momentum took me toward the creek. I should have let it.

Instead I grabbed a guy-wire attached to a nearby telephone pole. That slowed me down, but a piece of that heavy wire got under a ring on my right hand, and as I fell it pulled the ring halfway through my finger, then let go.

I fell just short of the creek, jumped up screaming in pain, and started running.

In seconds I had gone from being “all that” to being in desperate need of somebody, anybody, to help.

Screaming worked, and a lady came out of her back door 50 yards away and yelled at me to come to her. I obeyed. She wrapped my bleeding hand in a cold wet washcloth and phoned my dad.

The rest of it is a blur in my mind until Doctor Harrell cut the ring off, cleaned the wound, and sewed my finger back together. I don’t think I still have the ring, but I still have the scar. And I’m still thankful for Mrs. Rebstock.

Where do you go for help?

That was a freak accident, but there were many other times — usually with less bleeding — when I needed help.

That time I was screaming so loud it opened doors. Sometimes my screams were silent. That time it was urgent. Most of the time there was time.

But my question was the same — where do I go for help?

I wondered about that a lot when I was young, and I came up with an answer. I called it Concentric Circles of Care, and I drew it on a piece of paper. It looked a lot like this: In my young mind God was in every part of the circles. I didn’t need to label him or add him, I just assumed everyone always knew God was there helping. Back then I didn’t expect God to intervene directly. Now I would say he could step in at any point along the way. In fact I’ve seen him do just that.

But this was a “who do I go to for help” exercise, and the very first place was family. Almost every problem I might have, I decided, could be resolved in that inner circle.

There was usually no need for me to take my problems beyond that circle. But what if my family wasn’t there? It was a neighbor who helped me with my injury. Other neighbors had helped me along the way with other things, so neighbors got the second circle.

Some people might put “friends” in that circle. A lot of people don’t even know their neighbors these days, I’m told. That’s too bad.

Church was the next stopping point for me. I knew people at church, and they knew me. In fact the church helped our family a lot when I was young, and our family helped many people in the church.

The next step was to appeal to the whole town for help. I didn’t know what that meant, but our little town of 6,000 people had resources — including a hospital — that none of the other circles had. My mother spent time there, and I suppose that is why they got their own circle.

I didn’t think of the town as government but as community. Government was beyond my comprehension, in fact, though I knew they had things even our town didn’t have.

Today more and more people, it seems to me, start with the outermost circle. “I have a problem. I’ll take it to the government.”

Even as a young boy I knew that solving personal problems was not the purpose of government. It still isn’t.

We need to take much more personal responsibility, beginning with our own lives. Turning to family and friends and church and community takes the burden off of government so they can do what they’re supposed to do.

All we have to do is care for each other and the world we’ve been given. The result should be less government, more efficient government, and a lot more people doing good.

When you need help, start as close to the center of the circle as you can. When others need help, be there to care.