Back in the summer of 2013, Sports Illustrated published an article with a marvelous headline: Why Pujols Can’t Touch This Pitch. 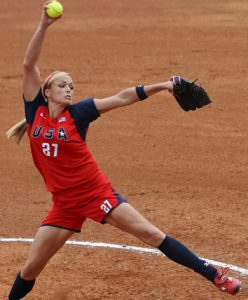 On a double spread, to the left of that headline, was a picture of Jennie Finch in full windup. The former Arizona Wildcat All American and Olympic Gold Medalist is one of the greatest women’s fast pitch softball pitchers in the history of the game.

She was retired by the time she faced Albert Pujols (who recently hit his 700th MLB home run!), Barry Bonds, and other talented hitters of baseballs.

None of them could get a bat on a Jennie Finch pitch.

Granted, she was throwing from just 43′ away from the plate, but her fastest pitch was only about 65 mph. A baseball thrown at 95 mph from 60′ 6″ reaches the plate in the same amount of time. And of course the softball is bigger.

Jennie would kindly remind the professionals about that, and also remind them that “girls hit her pitches” some of the time. The mother of three enjoyed the repartee and the good-natured challenge.

Pujols, ever the gentlemen, finally gave up. He walked away from the batter’s box, stopped, looked back at Jennie and tipped his cap.

The reason they missed

I can relate to how those men felt, at least a little bit, because I once experienced something similar.

Back in the day I was a tennis pro of the teaching variety. I didn’t play professionally, but I did play in a few regional tournaments.

My friend Robert, a solid lefty, talked me into playing doubles with him in another city, and off we went. We were playing indoors, with heavy green tarps about 25 feet behind each baseline.

In the semifinals we faced a team with a couple of big servers. I noticed that in the warmup, but I wasn’t ready.

They had the first serve, I was receiving in the deuce court, the ball landed in the service box and before I could move my racket, I heard the “boom” of the ball hitting that heavy tarp.

Three of his four serves that game were outright aces, but my partner did kind of touch the fourth. Still, it was an ace. Golly.

But it wasn’t about genetic reflexes, because, although we lost, we ended up going three sets with those boys. Their second server could only hit it about 115, which is plenty fast, but acted as kind of a training aid for us.

By the middle of the second set we were both returning those really big serves most of the time.

It turns out that a lot of it has to do with experience and allowing your mind to use that experience.

“That needs to be fixed.”

I was discussing this at a Links Fellowship group when Brian said, “I get that! I’m a painting contractor, and my company has been painting big buildings for years. I can drive up to a job, basically just glance at it, and see all kinds of things that need to be fixed.”

When I was a tennis pro, I could see a subtle flaw in someone’s backhand from four courts away. Coders can see both errors and beauty in computer code I couldn’t begin to detect, and a seasoned police officer can go through a “target house” and never once pull the trigger on a good guy.

What can you see that most of the people around you can’t see?

This fascinates me and gives me great respect for those who have put in the time to develop that expertise.

It also causes me to be amazed at the marvels of the human mind, but more on that another time.

What do you see when… 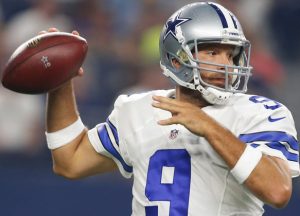 Part of what you see is what you don’t see. An NFL quarterback “sees” the target, even though the receiver is in motion, but he mostly sees the spaces on the field. When I have played quarterback in pickup games, I’ve never seen the spaces.

What do you see and what do you not see when you watch the news?

What did you see last week after Hurricane Ian left Florida? Did you see property destruction, or did you see people who needed help?

What did you see when you looked at a billboard from California promoting abortion and using a Bible verse to support the message? Did you see clever marketing or did you see, as Pastor John MacArthur did, “a reprehensible act of gross blasphemy.”

Have we trained our eyes to not see acts of evil in TV shows and movies? Recently a TV series my wife and I like featured a “super villain” serial killer sociopath. Pure evil. The next episode, based on the ads, would have brought that chapter to a close.

We recorded it, but I will not watch it.

I don’t need to feed my mind a diet of evil (the opposite of good), and I don’t want to train my mind to think evil is the norm. For the same reason, I don’t watch shows or read books that cast evil in a starring role.

I wouldn’t play tennis with my vision blurred, and I don’t want to go through life that way either.

In the Bible there is a beautiful story of a prophet and his servant. The prophet could see God at work, but the young servant couldn’t. The prophet prayed that the eyes of the servant would be opened, and what he saw was amazing.

Let’s train ourselves to look for the good. Literally thousands of people traveled to Florida to help after the storm. See that.

Learning to see the good takes practice, I know. Today would be a great day to start.

A Conflict of Visions