One of my favorite places to visit — and I am not alone — is Hawaii.

The 50th state of the United States has “something” about it. If Hawaii were a singer, it would win The Voice because it’s “the whole package.”

I could go into all the things I like about Hawaii, but I’d have to finish this article from there because I’m already feeling the urge to hop on a plane. 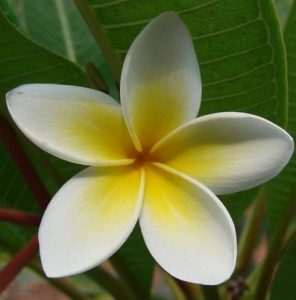 Is it the weather? The people? The anticipation? Could it be the rhythmic sound of the ocean or the sweet scent of plumeria? I don’t know, but I do know that when I arrive in Hawaii I am instantly relaxed.

That has been true for me on every island, from Kauai in the northwest to Hawaii (the Big Island) in the southeast. It is true in Honolulu (population 343,000) and in Lihue, where the population (6,450) is a smaller number than the length of the runway at the airport (6,500 feet).

Actually I do know the answer. It is… 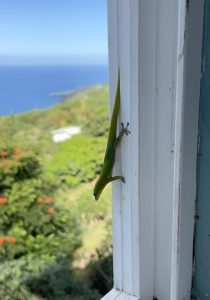 Our most recent trip to The Islands was a visit to the Big Island. We flew into Kailua-Kona and stayed on that side of the island. But we drove down to Captain Cook and one of our favorite breakfast places anywhere. It has good food and a great view, and the little guy in this picture joined us for a bit.

We kept driving around and finally arrived in Hilo, the largest city on the island. There we found a bookstore, and in that bookstore I found a used book called Practice Aloha.

“Maybe,” I thought, “that’s the Hawaiian way to say do good.” And in fact it’s pretty close.

Aloha, often used as a greeting, is a serious word in Hawaii. According to Wikipedia it is found in all Polynesian languages, but in Hawaii the word has more gravitas than it does in other places. For those who live there, and especially for native Hawaiians, it is not a throw-away word.

To define it was one of the challenges faced by Lorrin Andrews, an early missionary to Hawaii and the author of the first Hawaiian language dictionary.

All of those have multiple entries for “aloha,” as a noun, as a verb, and as an adjective.

Many people believe aloha cannot be fully defined, but everyone agrees that love is a big part of it.

There is a statute in Hawaiian law known as Aloha Spirit, added in 2013. You can read it at this link.

It says “Each person must think and emote good feelings to others.” It also says that state government officials as well as members of the judiciary may give consideration to the Aloha Spirit in carrying out their duties.

There is no punishment for failing to keep the Aloha Spirit law, no jail time, no fine, no public shaming. But there it is as part of state law.

It is the closest thing to legislating morality that I’ve seen in the modern world.

Has it made a difference? I don’t know, but I’m glad it’s there. Anything that reminds people to be kind, to be pleasant, to be humble, and to be patient is a good thing.

Every good moral choice can help make the world a better place. How do we get there? Not by law.

The best path to moral improvement is not legislation, it is personal choice based on deeper beliefs.

You decide how you will behave

Remember 2020 and 2021? There was a pandemic during those years, and my opinion is that almost everyone involved in fighting it, at least early on, was trying to do the right thing.

With sharper hindsight, it is clear that in the U.S. we made a lot of mistakes in how we handled things.

In much of America there were lockdowns and quarantines of both the sick and the healthy. This was accomplished mostly through coercion with what sounded to many like a reasonable purpose behind it: keep people from infecting each other until we had a vaccine.

Even with the best of intentions — and as the pandemic progressed intentions may not always have been the best — people began to rebel at being coerced.

I’ve wondered from the start if we might have had better cooperation by simply saying: “You decide how you will behave, but we strongly recommend that you take these precautions. They will help you and those around you be safer. Thank you for doing good.”

Morality is a critical ingredient in society. Without it almost nothing works as well as it should. That includes laws, because in every law there is always a “Yes, but what if….”

We work hard to get the “what ifs” right, because they are important. But laws will never be enough.

We have tried to legislate and regulate our way forward. Someday we will be buried under the weight of it all. In 2020 Congress passed 178 laws. In that same year 3,353 rules and regulations were issued by government agencies. And that was a good year!

Jesus said, “Do to others what you would like them to do to you.” That goes beyond emoting good feelings and includes doing good.

Do good. It will help save the world.

I have a theory: Theories are wrong.