Once upon a time there was a prince who wanted to marry a princess, but he couldn’t find one that was suitable. Something was always wrong. Perhaps they had bad table manners. Maybe they were very unprincess-like in some other way. 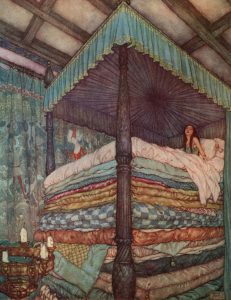 Then one evening a young girl knocked on the castle door. It was raining and she was all wet, and she claimed she was a princess!

The old queen didn’t think she was, but instead of saying so she quietly devised a test.

She had a bed made up for the young guest, but before any bedding was added, the queen placed a single pea on the wooden slat. On top of that she had 20 mattresses stacked and 20 eider-down beds on top of those!

The next morning she asked the girl how she had slept, and she said, “Terrible! I was awake all night, because there was something very hard in the bed. I’m sure I’m black and blue all over.”

Now the queen knew this was indeed a princess, for no one else could have been so tender.

The prince and the princess were married, and they put the pea in a museum where it still is today. Unless someone has stolen it.

Such is the story of The Princess and the Pea, published by Hans Christian Andersen in 1835. It did not sell well originally, according to sources, but it has never gone out of popularity since Andersen told it.

While the queen in the story devised that test rather quickly, some are well thought out ahead of time.

“How many manhole covers are there in New York City?” Questions like that were famously used in interviews conducted by some high tech companies. The answer was never important — the applicant’s ability to cope and process and be creative was.

“Do you know how fast you were going?” What kind of a test question is that? Does your score go up or down if you say, “Apparently not fast enough or you wouldn’t have caught me.”

Of course there are those “standardized” tests like IQ, EQ, and BMI. (Quick test: which one of those is not like the others?)

I remember my original driver’s test very well, which became a great story.

And I remember a test I took in the Boy Scouts, even before I could drive. I had been chosen to join an honor camper society called The Order of the Arrow, and I was excited. Membership wasn’t guaranteed, though, because first there was a test formally called an Ordeal.

Some day I’ll write about that, but it included 24 hours of silence, a lot of physical labor (for good purposes), a night in the woods alone and finding your own way back to others in the morning, and a long time between meals. It was meant to be a challenging test, and it was.

Is this a test?

“Does this dress make me look heavy,” could be an honest question. It could also be a test.

And that is the problem with many of the tests we face: we don’t realize they are tests. Of course there are the occasional (formerly much more frequent) “This is a test” announcements. Most of those had to do with broadcast systems, I believe, which may be why I hear them less.

Once a man my father worked for asked him if he would tell a customer of theirs a half-truth. Dad said that he would not, and the company owner said, “Good, because if you would lie for me you would lie to me.” It had been a test instead of a request.

Had anyone known that was a test, they would have passed it. Fewer would pass it without knowing, which is why sometimes tests only really work when they are given without being announced.

Perhaps the most elaborate, most challenging unannounced test ever was given to one man: Job.

His story is told in the Bible in a book that appropriately goes by his name. Reading Job today, we know that at its most basic the incredible suffering of Job was all part of a test of his faith.

We also know that he passed that test — his faith was never abandoned — and that in the end his fortune was restored at double what it had been. “The Lord blessed the latter days of Job more than his beginning,” we are told. But we are never told that God explained to him that it was a test of his faith, and that God believed he would pass.

As election results come in, some people are disappointed and some are elated. Both of those can be tests.

For those who will wield political power over the next two years, there is an ongoing test. Living up to campaign promises is part of that. Representing the people who elected you is part of it. Not yielding to bullying from radical activists or Political Action Committees (PACs) is another. (We hear more about radicals, but PACs probably do more damage.)

In politics, in life, in faith, we have been and will be tested. There are days when it seems like all of life is a test.

Some tests are severe — almost Job like. Some are easier. All of them matter.

One of the most important tests you will ever take you will also give.

Socrates said, “The unexamined life is not worth living.” Paul wrote, “Examine yourselves, to see whether you are in the faith. Test yourselves.”

Both men understood the great value of self-examination and encouraged it.

So here’s a test question you can use: are you doing good?

To find out, you only need to examine yourself. I hope you ace that test!