Most of us are usually willing to take time to make up our mind about a choice, but once our decision is made — or our order is placed — we don’t like waiting any more.

And so we have fast food, with food sometimes being a generous description.

We also have Amazon, delivering (in some cities) on the same day.

A delightful caricature of Amazon is featured in the Disney series, The Santa Clauses. An entrepreneur has an idea for a new company. He calls it — wait for it (see what I did there?) — EverythingNow.

Who doesn’t want that? Just kidding, because I know you don’t. Patience, after all, is a virtue.

It is also rare, at least on the highways in most major cities. And in checkout lines, or almost any kind of line you can imagine.

Shielded at least partly from view by sheet metal and tinted windows, people in cars seem less patient than people who can be seen. I can imagine someone behind the driver who fails to speed away when the light turns green saying, “What are you waiting for!?”

In fact I think I’ve heard myself say that.

Are you ready for Christmas? 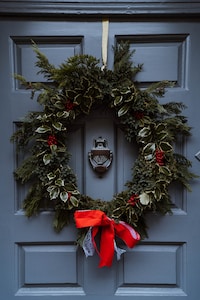 Are you ready for Christmas? is a question often asked around this time every December. I’ve asked it myself of different people in different ways.

For many people there is also the religious sense. After all, the purpose of Christmas is not presents, it is to celebrate the birth of Jesus. Gifts are exchanged, I’ve been told, because the Magi (the Wise Men) brought him gifts.

Among those who consider Christmas to be primarily about Jesus, many observe Advent.

Advent is the first season of the Christian church year. It leads up to Christmas and includes the four Sundays that precede December 25. Advent is intended to help people look forward to the birth of Jesus.

That makes sense, because Advent is derived from the Latin word adventus which means “coming.” (For some time Advent was more about the second coming of Christ, but now it is almost exclusively about the first.)

All of that got me thinking about who was looking forward to the coming of Jesus before he was born. I couldn’t think of many.

There was Mary, of course, and Joseph. Additionally there was Mary’s relative Elizabeth and her husband Zechariah. They were the parents of John, later called John the Baptist. Elizabeth was the first person other than Mary or Joseph to know about Mary’s baby.

Wise men and others 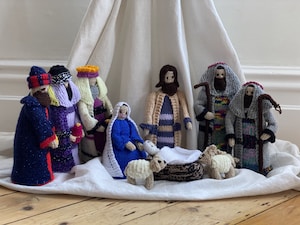 In another country, according to the Bible account, there were wise men who also anticipated the coming of Jesus. We call them The Three Wise Men, although in fact we don’t know how many there were. There were three gifts listed, and long ago someone assumed one gift per person.

We also call them Magi because the Greek word magus means wise man. They were not magicians, in spite of the similarity in the words. They were, likely, astrologers. More importantly, their studies led them to expect that a special star would announce the birth of a King.

Now we are up to seven people (if there were three wise men) expecting the birth of Jesus. It seems likely that there were a few more friends and relatives the Bible doesn’t mention, but the total number was certainly small.

What were they waiting for?

I imagine Mary was mostly waiting to deliver her first child. Joseph was probably anxious for Mary, and perhaps so was Elizabeth who now had a six month old child of her own.

The Wise Men had been waiting for some time for the birth of a King. When they saw “his star,” they followed it and made it to Jerusalem, the capital city where they assumed the new king would be.

Simeon, a faithful Jew, was waiting for the Christ and got to see him. (Luke 2:22-35 tells his very cool story.)

You may have seen it written, perhaps on a Christmas card, “Wise men still seek him.” I like the sentiment, and it can be applied to us all.

Many find it interesting that the prophets and religious leaders who lived in the very land where Jesus was born somehow missed his birth.

Here in America, we often miss things that are of utmost importance. We are distracted by “news” and “markets” and “social media” and the activities of daily life.

It was probably no different in Israel, so I can easily understand how their prophets could have missed Jesus.

And I can understand why we today miss the birth of Jesus, “the Lord’s Christ,” even though the celebration is called Christmas.

A few of us, I know, are waiting for a birthday party.

When I was a child I was always excited to know my birthday was coming. As I grew up a little I became more excited about the birthdays of others than my own.

These days I’m also excited about celebrating the birthday of Jesus.

I hope at least in part you are waiting for the celebration. Jesus is, after all, the reason for the season.

May your Christmas be blessed!

And may you Do Good in your waiting and in your celebrating.

Give us more! The woke and Turkish Delight.

How to fix our environment (really)