There was a time when I thought that the perfect day to shop for Christmas presents was December 24.

For some reason I’ve always liked the pressure of the moment, whether in sports or shopping or school. Sadly (I now realize) I would sometimes artificially create that pressure.

But I don’t suppose the Magi made their way to Jerusalem, asked King Herod where the baby was (he didn’t know), and then said, “By the way, are there any stores open? We want to pick up some gifts for the new King.”

Being Wise Men they had already selected specific gifts fit for a king. My belief is that these gifts did not come from a store, they came from their own possessions.

A quick look at them shows a depth of thought that might have been missing from my own selections once upon a time. Just sayin’. 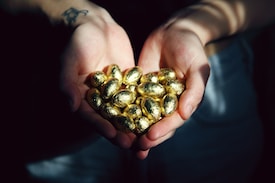 None of these gifts, you will note, are typical for a baby shower. But the Magi’s gifts weren’t meant for a baby, they were meant for a king. They even asked Herod, “Where is he who is born King of the Jews?”

(That gift you are giving this year, who is it for? Thinking about that can make a big difference in your choices.)

Gold is a gift fit for a king. Holding the number 1 spot on the list of popular precious metals, it is used in jewelry — including crowns. It is also used as currency and in ornaments.

As it turns out, gold is still a very popular gift these days. But for this baby it held special significance — he was and would be known as the King of Kings. 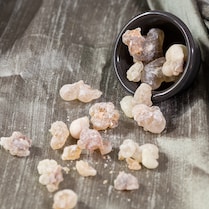 I can kind of understand giving some perfume to a newborn, or at least something to help make the room smell a little better.

But this is not that. Frankincense is an expensive perfume that is made from trees in India and Arabia.

Once again, it is a gift fit for a king. In the case of Jesus, a sweet smell is especially fitting. Here’s why.

In the Bible we often read that there is a “pleasing aroma” detected by God. The first instance of this is when Noah offered a sacrifice to God (a burnt offering — grilled meat!) for saving him and his family and restoring the earth.

Genesis 8:21 says, “And when the LORD smelled the pleasing aroma, the LORD said in his heart, “I will never again curse the ground because of man….”

Fast forward most of the way through the Bible, and you’ll find this in Ephesians 5:2: “And walk in love, as Christ loved us and gave himself up for us, a fragrant offering and sacrifice to God.”

The perfume Jesus received was surely amazing, but not as fragrant as his own sacrifice. This is the least known of the the three gifts, but it matches the others in significance.

It is a perfume made from rare thorn bushes that grow in Arabia and Ethiopia, but it isn’t used as a scent. It is used as an antiseptic, but also as an anointing oil and as an embalming fluid.

Note that the baby would be a prophet and priest and king — all offices for which the person is anointed. And of course Jesus would, on the day of his death, wear a crown of thorns.

Was the gift meant to be prophetic of Jesus’ death? Probably not by the giver, who may have presented it as an anointing oil for the newborn king.

Gifts that keep on giving

These were all the kinds of “gifts that keep on giving.”

Maybe Joseph and Jesus used the gold when Joseph opened “Joseph and Sons Carpenter Shop” several years later. We never hear of it again, but it would have been of great use to the family.

Regardless of whether any of the gifts were used, I am certain they were all remembered with wonder and awe. For me there is no doubt that they were an important part of the beginning of the most important human life ever lived.

Even before the Magi arrived, the shepherds came to see “a baby wrapped in swaddling cloths.” They were sent by angels who told them the child was a “Savior, who is Christ the Lord.” When they arrived they told everyone what had happened.

Most people marveled at their story, but “Mary treasured up all these things, pondering them in her heart.”

The gifts the Magi brought were for Jesus, but they were added treasures for Mary too.

Most gifts these days are purchased then given, and some of those keep on giving for a long time.

Imagine buying someone a house, for instance, or even a car. When I was a kid the gift of a bicycle lasted for several years.

Jewelry can also last a long time and carry memories with it that last even longer.

There is another famous list of three gifts that shows up in the Bible. They come from God to us, but we are allowed to share them and give them away, over and over again.

I speak of course of faith, hope, and love.

Give someone you know encouragement when they are struggling, or just needing a boost. That increases their faith, both in themselves and in others.

Give someone hope when their world seems close to hopeless. That strengthens their resolve and helps them see a light at the end of the tunnel so they keep on going.

Give someone love when they feel alone, a feeling that is magnified in many during a time like Christmas. They will know from this gift that they are not alone, that they are cared for and part of a family.

Those are gifts that keep on giving, and a great way to do good.