It seems unlikely that you have not heard about Damar Hamlin this week. In case you haven’t, you should. 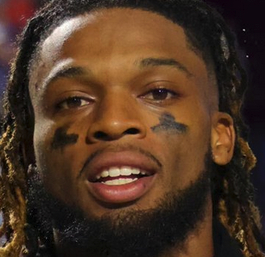 Damar is a professional football player, a safety for the Buffalo Bills, and he suffered cardiac arrest on the field last Monday night. It was the first quarter of a nationally televised game against the Cincinnati Bengals. Hamlin was involved in a tackle and appeared to take a blow to the chest.

The 24 year old got up from the ground, took a couple of steps, then collapsed. Team personnel were with him immediately, and an ambulance was brought onto the field. Denny Kellington, Bills Assistant Athletic Trainer, performed CPR and likely saved Hamlin’s life. Damar was taken to the University of Cincinnati Medical Center, where he received outstanding care.

Reports on Thursday said he was awake and improving. His first communication — written, because he had a breathing tube — was, “Did we win?” For a lot of reasons, that made the doctors smile.

The game was actually suspended, which was appropriate, and late Thursday evening it was cancelled. That has interesting implications for the playoffs.

But what is far more important to me is the reaction of football players, sportscasters, other athletes, and everyday people to what happened on the field Monday.

The picture here was posted on Twitter by Robert Griffin III, a very famous football player (Heisman Trophy, All Pro QB, etc.). He wrote “Please don’t share the video of the Damar Hamlin play. Share this because we are all praying for him and his family.” 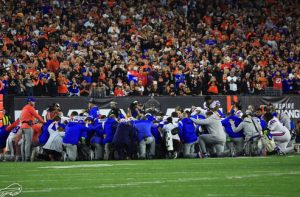 What he asked everyone to share is a picture from the Buffalo Bills organization. It shows players and personnel from both teams spontaneously gathered at mid-field and praying for Damar Hamlin after the ambulance took him.

All of us have heard the standard phrase “thoughts and prayers,” which is directly related to “How are you?” and “I’m good” in depth of meaning. They are placeholders, throw away words we speak out of habit, rarely out of our hearts.

Many newscasters used the “thoughts and prayers” phrase, but one who did not embrace it was Dan Orlovsky.

Dan is a former NFL quarterback who is now a sportscaster with ESPN. During a broadcast, with two other sportscasters on the set with him, he said, “Maybe this is not the right thing to do, but it’s on my heart and I want to pray for him right now.”

He said he was going to close his eyes and bow his head and pray, and he did.

Many people who were watching that broadcast recorded it and tweeted it. Millions of people have now watched it, and the response has been overwhelmingly encouraging and thankful.

In case you haven’t seen it, you can see Franklin Graham’s retweet of it by clicking on this link. It will open in a new tab.

There are a number of things people do in private that should only be done in private. I know you can name several.

Increasingly a faction of society has added prayer to that list. Never mind that prayer has been done in public since people began talking to God. Forget that sessions of Congress begin with prayer. Ignore the fact that the inauguration of a United States president includes prayer.

The goal, it seems, is to remove God from the public picture.

That’s why former high school football coach Joe Kennedy eventually found himself in the Supreme Court of the United States. Famously, now, the Bremerton High coach would go out to the middle of the field after a game and pray. Eventually some students decided to join him, and you probably know the rest.

His first prayer on the Bremerton High field was in 2008, and the case was decided in his favor by the Court in 2022. Fourteen years.

And in about fourteen minutes last Monday night, dozens of people decided that it was OK to pray in public on a football field.

Yes, I know the complaint against Coach Kennedy was that his actions might give the impression that the school endorsed and even encouraged prayer. I know this is not high school. But both this game and the school games are football, a potentially dangerous sport.

I won’t dive into that any deeper here. What I will say is that the hearts of people responded to the near death of Damar Hamlin the way hearts respond, and that is good.

The Buffalo Bills organization has been all over this. They said publicly they believe in prayer. Their response, and the response of the NFL, has been beautiful.

You might expect that from Hamlin’s team, but it has gone beyond that. The Buffalo Hockey team all donned jerseys with Hamlin’s number — 3 — on them.

NBA teams and players poured out support for Damar. Public buildings changed their lights to blue — the color of the Buffalo Bills — to honor Hamlin.

Many on Twitter changed their profile picture from themselves to a meme saying “Pray for Damar – 3,” including the Buffalo Bills themselves.

When the good news was announced that Damar was awake and that it appeared that he was neurologically intact, the reactions were on point.

Bills head coach Sean McDermott said, “Glory to God for his keeping Damar and his family in the palm of his hand over the last couple of days, and for his healing power.”

Damar’s GoFundMe account raising money for kids has received more than $7,000,000 in donations this week! My favorite was a $19,203 donation from the Chicago Bears. 1920 is the year the Bears were founded, and 3 is Damar’s number. Connection.

One of his doctors answered that question later with, “Yes, Damar. You’ve won the game of life.”

And in no small way, so have we all. Millions of people prayed unselfishly. Thousands of people gave money. Cincinnati school children sent get well cards.

We came together for something outside ourselves.

Can we keep doing that?

Let’s continue to do good. It is obviously in us.