If there is anything that bugs me — occasionally, I mean, not all the time — it’s the environment. 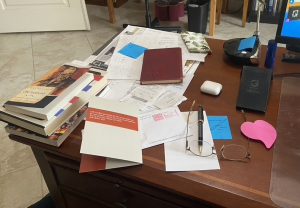 Just take a look at this picture, and you’ll see what I mean. Books are stacked up, mail is here and there, receipts I should probably look at are laying around. And I just remembered that I dropped an almond on the floor yesterday.

On top of that, some days it’s cold in here and some days it is almost hot. My wife tells me those are called “seasons,” but I’m pretty sure it’s climate change. Right now it’s colder than it was this time last year, and that’s empirical evidence.

I’m fairly sure I can get a grant from the state of Arizona to get this place squared away.

The solution, as I see it, is to apply for about $10,000, which no one would miss, then hire a couple of day workers to come in and organize. Naturally I’d earmark most of the funds to study better solutions for the future.

Here is a headline I found on Inc.com, obviously a trusted and reliable source:

A Messy Desk Is a Sign of Genius, According to Science

By now all of you with messy desks have clicked that link, read the article, and are reveling in your mental acumen. Yes, we are a special group of people.

For instance some person with a very tidy desk once said, “Let us allow the forests to grow as they will. Cutting down trees for our own use is a bad thing. We’ve done too much of that, and the air is suffering, not to mention the trees.”

So trees grew, and they dropped seeds (as they do) and little trees grew. Soon the forests were thriving and we were on our way to replacing some of the timber we used.

Until forest fires destroyed millions of acres, in no small part because we had failed to keep the forest floors clean.

Native Americans kept the forest floors thinned out, knowing how out-of-control and dangerous underbrush could get. They weren’t “tree huggers,” they were tree users. They were tree respecters. Bottom line: they were good stewards of that resource.

The answer to environmental woes — and in fact to many other woes — is stewardship.

You may be familiar with the term steward, though probably more in the feminine: stewardess. Steward is a term for one who looks after the passengers on a ship or aircraft, and it may still be in fashion on seagoing vessels. On airships it has given way to Flight Attendant, a more collective term.

I’m guessing that if you’ve sailed or flown, you have experienced both good and not-so-good stewardship, and that from trained professionals. You have liked the one and not the other, and you have talked about it.

Now imagine how the earth feels about your stewardship. Is it filing a complaint with the owner, or is it sending along a thank you note?

As is our wont in America, we have turned the earth into a political issue. In doing so we have allowed government officials, many unelected, to tell us what is best regarding the environment. Often, at least the way I see it, that leads to very poor stewardship.

As an example, consider the ludicrous but short-lived suggestion that we get rid of gas stoves and ovens. I’m thankful that some bureaucrat somewhere came up with the idea, effectively publicizing government overreach.

(Word has it that the fellow with the gas stove idea once worked for the Ministry of Silly Walks in London. That made him a most desirable addition to the gang in Washington charged with thinking up Silly Ideas for How We Can Do Bad and Feel Good About It.)

Even without well-meaning but misguided environmentalists plopping windmills and solar panels everywhere (talk about littering!), we think mostly about the political impact. Are we leading the world in caring for the earth? Not even close. Are we the worst? Same answer.

Both individually and collectively we have to realize that this is not the environment, it is our environment. And then we need to move away from scare tactics and into care tactics.

Let’s do good for earth 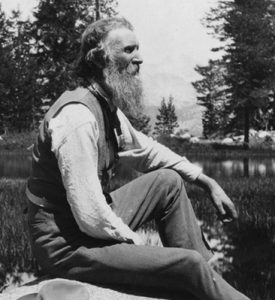 World environmental issues are extraordinarily complex. Recognizing that, we should still educate ourselves so we cannot be easily misled. As John Muir said, When one tugs at a single thing in nature, he finds it attached to the rest of the world.

On the individual level, the issue and solution are both simple. We live on earth, and we should take care of the place where we live. If it is messed up, like my desk, it is our fault. We should not leave it to governments alone, we — each one of us — should be good stewards.

That means using our resources wisely and well, including oil and gas and coal, resources God has given the earth in abundance. Should you drive an electric vehicle or a gas powered truck?  The one will not save the planet and the other will not damage it. Decide by studying and then thinking about your stewardship of your resources, including your planet.

Someday, perhaps, solar and wind will be viable. Today they are, in the vast majority of situations, poor stewardship.

And being good stewards, I believe, is how we do good for each other and for the earth.

What do you do with the bad news?